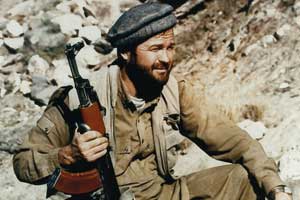 In 1988, shortly after winning his first term in Congress, Dana Rohrabacher dabbled briefly in another vocation—freedom fighter. With Afghanistan’s anti-Soviet insurgency a cause célèbre for conservatives, he traveled to the front lines. Sporting a thick beard and traditional Afghan attire, the congressman-elect joined up with a rebel infantry unit whose mission included laying siege to a Soviet position.

When I met Rohrabacher recently at his Capitol Hill office—adorned with mementos of his Afghan adventures, including a tapestry of the legendary mujahideen commander Ahmad Shah Massoud—I asked if he’d joined the battle. “Let’s put it this way,” he said, a glimmer in his eye. “I didn’t carry a gun—most of the time.”

It’s the kind of adventure that has earned the Orange County Republican, who’s 62, a reputation as “colorful,” or, as some put it, “bat-shit crazy.” He’s a banjo-playing, folk-singing, arch-conservative surfer, who—at a time when other politicians insisted they’d never inhaled—publicly proclaimed he’d done “everything but drink the bong water.” An outspoken climate change skeptic, Rohrabacher once joked that “dinosaur flatulence” may have caused a prehistoric episode of global warming. For almost two years, he ran a quixotic congressional investigation (pdf) into the Oklahoma City bombing, dispatching staff as far as the Philippines to prove that Terry Nichols had ties to Ramzi Yousef, one of the planners of the first World Trade Center bombing. At a cringe-worthy hearing last fall, he lambasted an Iraqi politician over the “type of bloodlust” that “exists in your society.”

But though Rohrabacher often comes across as God’s gift to liberal bloggers, on Afghanistan he is recognized as a genuine congressional expert—and he’s staked out a position closer to the Hill’s most liberal Democrats than to his fellow Republicans. He opposes Obama’s surge, warns that the troop escalation will only strengthen the Taliban’s hand, and worries about history repeating itself: “The American Army is playing the role of the Russian army,” he laments.

Rohrabacher’s Afghanistan history dates back to his days as a speechwriter and presidential adviser in the Reagan White House, where he helped shape the Reagan Doctrine—the policy of arming resistance movements to undermine Soviet influence, with the mujahideen serving as Exhibit A. “I’d be there with guys in full Afghan garb in the executive dining room of the White House,” he recalls. Michael Scheuer, the former chief of the CIA’s bin Laden unit, says Rohrabacher was one of the few lawmakers who were “interested in Afghanistan to an extent that surpassed how many dead Soviets there were.”

In the years after the Soviets fled Afghanistan in 1989, Rohrabacher says, his “passion” was to bring back the country’s exiled king, Muhammad Zahir Shah, the only figure he believed could unite Afghans. Instead, by 1996, the Taliban had captured Kabul, and Rohrabacher began actively working to undermine them. At one point he hitched a ride in a UN supply plane to the northern city of Mazar-i-Sharif with the aim of organizing a coalition of anti-Taliban warlords such as Massoud and the Uzbek militia commander Abdul Rashid Dostum. “I was flying all over the world,” he says. “And I was on my own. You know, I was a real freelancer on that one.”

Indeed, the congressman “was seen as having his own foreign policy,” says Marvin Weinbaum, a former Afghanistan and Pakistan analyst at the State Department and now a scholar at the Middle East Institute. “He saw all sorts of nefarious plots that we were hatching with the Taliban. He was certainly out to discredit the [Clinton] State Department.” Following a 2001 meeting with the Taliban’s foreign minister in Qatar, US critics accused Rohrabacher of breaching the Logan Act, which prohibits American citizens from making unofficial diplomatic overtures.

In the fall of 2001, Rohrabacher’s friend Massoud was assassinated by a pair of Al Qaeda operatives. Upon hearing the news, Rohrabacher wept in his office. Then he phoned the Bush White House in a frenzy: He believed Massoud’s murder was the prelude to a major terrorist attack and requested an immediate audience with then-national security adviser Condoleezza Rice. He got an appointment for the next day—September 11.

In the aftermath of the attacks, Rohrabacher was in demand. In meetings with Rice, as well as Pentagon and CIA officials, he says, he argued that the Northern Alliance and a small US team should oust the Taliban—the more heavy-handed operation favored by some military leaders wouldn’t work. Rohrabacher’s aides, meanwhile, worked the phones with their Afghan contacts, gathering intelligence on the Taliban’s movements. “I had everybody’s sat-phone number,” says Al Santoli, a former foreign policy aide to Rohrabacher. “I spent as much time at the Pentagon as I did in the congressional office.”

Even now, Rohrabacher grins when recalling the overthrow of the Taliban. “Everything was ours,” he says. “We had the total faith of the vast majority of Afghans.” But, he adds, it all went sour when the administration decided to shift gears. “The turning point was when George W. Bush through his hubris decided he was going to—I can just see him saying, ‘We’re on a roll, let’s go into Iraq.’ We didn’t have the ability to sustain large-scale military operations in Iraq and still rebuild Afghanistan.” Still, Rohrabacher was a steadfast backer of the war during the Bush years, a stance he now considers “a mistake.”

Today, Rohrabacher vows to vote against any funding for Obama’s surge in Afghanistan. Instead he favors, perhaps unsurprisingly, a revival of the Reagan Doctrine. He regards the Karzai government as hopelessly corrupt and sees a decentralized power structure as the only solution. Rather than putting more American troops in harm’s way, he’d prefer that the US reinvigorate and perhaps arm Afghanistan’s militias (including those associated with his ex-Northern Alliance friends)—the same forces the US and international forces initially tried to dismantle. And instead of spending some $33 billion on the surge, Rohrabacher wants to allocate $5 billion for “buying the good will of local village leaders” while also embedding small US units in villages. “We have to have our people become part of the Afghan family,” he says. Rohrabacher has distributed a blueprint—authored by a Special Forces major whose unit developed a close rapport with an eastern tribe—for doing just that to all of his colleagues.

As the Obama administration formulated its war strategy last fall, Rohrabacher made his case to top officials, even the president himself—to little avail. (Only Ambassador Karl Eikenberry, who in diplomatic cables expressed doubts about the surge, concurred with him over glasses of Uzbek brandy during a dinner party at his house, Rohrabacher says.) Still, some of DC’s top Afghanistan experts think Rohrabacher’s ideas have merit: His argument for a decentralized approach “deserves serious consideration,” Paul Pillar, former national intelligence officer for the Near East and South Asia, told me. “I would underscore that it is a totally different approach from what the administration has adopted.”

As our interview drew to a close, an aide came in to announce Rohrabacher’s next appointment. The visitor was a young Afghan expat, who’d been referred to him by a retired US general who figured the congressman might appreciate his insights. “Here’s an Afghan for you,” Rohrabacher said, striding out with a boisterous laugh. “This is typical.”