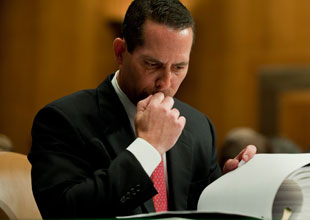 Daniel Sparks, the former head of Goldman Sachs mortgage department, sorts through a binder of exhibits during the Senate Homeland Security and Governmental Affairs subcommittee hearing on Wall Street and the financial crisis on Tuesday, April 27. | © Pete Marovich/ZUMApress.com.

During Tuesday’s 10-hour grilling of past and present Goldman Sachs executives and traders before a Senate subcommittee, the questioning frequently centered on four mortgage-related products the company had sold to investors as the subprime market was about to implode. At one point, an indignant Sen. Jon Tester (D-Mont.) said, “Every one of these [deals] looks like a wreck waiting to happen.” And he asked Daniel Sparks, the former head of Goldman’s mortgage department, how he “in good faith” could peddle these mortgage-related products to clients when it was clear the mortgage market was close to complete collapse—and when Goldman itself had begun “shorting,” or betting against, this very same market. Sparks—whose overall evasiveness drew the ire of Senate investigations subcommittee chair Carl Levin (D-Mich.) and other lawmakers—replied: “At the time we did those deals, we expected those deals to perform.” Numerous documents released by the subcommittee, however, indicate that Sparks, who left Goldman in the spring of 2008, and his former employer knew otherwise. And his testimony raises a serious question: whether he lied to Congress under oath.

The four doomed deals were put together or sold between December 2006 and late April 2007. Each involved an exotic product called a synthetic collateralized debt obligation (CDO), made up not of mortgage-backed bonds but instruments that merely referenced and reacted to the performance of a set of mortgage bonds. Each would become a spectacular failure, mostly winding up in junk status and rendered nearly worthless. One of these deals was Abacus, which is the focus of the Securities and Exchange Commission’s (SEC) billion-dollar fraud case against Goldman and company vice president Fabrice Tourre. That suit alleges that the firm deliberately created and sold what amounted to a ticking time bomb—a subprime mortgage-based product that was designed to go bust—and didn’t tell investors that a hedge fund trader betting against Abacus had influenced the product’s creation.

As it was making those deals, Goldman was taking a far more negative view of the mortgage markets. So the issue is, what did Sparks know and when did he know it? More precisely, did he—could he—really expect these deals to do well when Goldman was peddling them to customers?

In 2006, delinquencies in risky mortgages spiked in the US, and the outlook for the subprime market grew bleaker. Beginning in 2007, Goldman began shorting the mortgage markets. One Goldman trader, Joshua Birnbaum, stated in a 2007 performance self-evaluation that Goldman should not only “get close to home,” or balance its long and short bets, but “get VERY short,” a strategy he said he shared with Sparks. Goldman’s chief financial officer, David Viniar, likewise mentioned in an email the firm’s “big short” of the mortgage markets. And in an October 2007 letter to the SEC, the firm said, “During most of 2007, we maintained a net short sub-prime position and therefore stood to benefit from declining prices in the mortgage market.” It follows, then, that any deal or product hinging on the fate of the mortgage markets, like the four deals Sparks was questioned about, was likely to fail miserably.

Internal documents show Sparks himself knew and often wrote about the firm’s negative view of the mortgage markets and mortgage-related products:

Sparks was right. In late December 2006, soon after Goldman’s top brass decided the firm quickly needed to short the market, subprime lender Ownit Mortgage Solutions filed for bankruptcy protection. In February 2007, British bank HSBC warned of staggering losses in its subprime portfolio, and on April 2, 2007, as Goldman was shorting the mortgage markets—yet still selling its investors synthetic CDOs based on these doomed mortgages—subprime originator and servicer New Century went belly-up. Not long after, the major rating agencies downgraded huge swaths of mortgage bonds, all but freezing the subprime market and the demand for CDOs.

There’s no doubt that Sparks knew the mortgage markets were in deep trouble, and that any CDOs linked to mortgage bonds were also imperiled. Given his firm’s position and his own emails and internal Goldman communications, Sparks’ testimony seems as dubious as the mortgage-backed securities his division sold to investors.