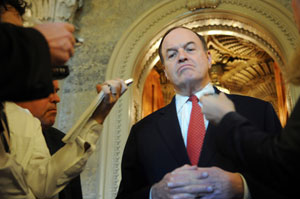 On the opening day of debate over legislation that would rewrite the rules of the financial markets, Sen. Richard Shelby (R-Ala.) all but disavowed the bill, claiming it wouldn’t fix anything—and would in fact hurt the US economy. Here’s why that’s shocking: Shelby, the top GOP negotiator on financial reform, has been working on the bill with his counterpart, Sen. Chris Dodd (D-Conn.), for more than three years. Dodd and Shelby have been engaged in grueling, closed-door negotiations for months.  No Republican has more invested in the bill than Shelby.

Yet today on the Senate floor, Shelby pretty much eviscerated the measure, while a red-faced and anxious-looking Chris Dodd sat across the aisle from the Alabama senator. “This bill threatens our economy,” Shelby said. He added that the bill would leave taxpayers on the hook for future bailouts; the derivatives provisions would impair the economy; a new consumer bureau would stifle consumer lending; and a proposed Office of Financial Research, which would gather financial data used to predict future financial crises, would pry into Americans’ lives and violate their civil liberties.

After Shelby finished his opening remarks, Dodd replied tepidly, half-jokingly, “Other than what you just heard from my colleague in Alabama, he likes the bill.” It’s doubtful whether Dodd actually believes that; anyone who heard Shelby’s remarks doesn’t. Does this mean all those months of talks between Dodd and Shelby were for naught? Possibly. Are Democrats and Republicans back at square one on financial reform? Sure looks like it.