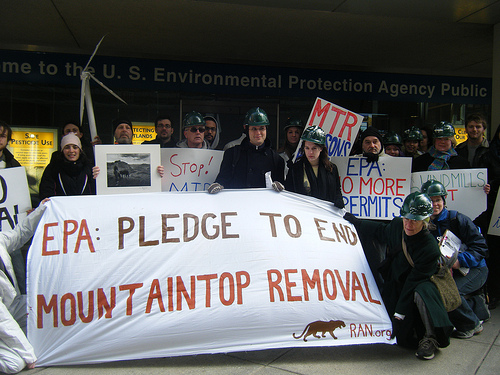 After Wednesday’s sucker-punch to enviros on offshore drilling, the Obama administration made an announcement today more to their liking: new guidelines to encourage tougher oversight of mountaintop removal (MTR) coal mining. Anti-coal activists are calling the directive the “most significant administrative action ever taken” on the controversial practice.

The Environmental Protection Agency has provided guidance to ensure that state and federal regulators enforce existing environmental standards more strictly. The EPA also made public several scientific reports on the impacts of surface mining, and announced the creation of a website where citizens can track the permitting process for new mining sites.

Mountaintop removal mining, which involves blowing off the tops of mountains to reach coal seams beneath the surface and dumping the waste in valleys and streams, has devastating effects on the environment and local communities. The EPA’s announcement was perhaps most notable for formally recognizing those impacts:

The resulting waste that then fills valleys and streams can significantly compromise water quality, often causing permanent damage to ecosystems and rendering streams unfit for swimming, fishing and drinking. It is estimated that almost 2,000 miles of Appalachian headwater streams have been buried by mountaintop coal mining.

“The people of Appalachia shouldn’t have to choose between a clean, healthy environment in which to raise their families and the jobs they need to support them. That’s why EPA is providing even greater clarity on the direction the agency is taking to confront pollution from mountain top removal,” said EPA Administrator Lisa P. Jackson. “We will continue to work with all stakeholders to find a way forward that follows the science and the law. Getting this right is important to Americans who rely on affordable coal to power homes and businesses, as well as coal communities that count on jobs and a livable environment, both during mining and after coal companies move to other sites.

The EPA has had a mixed record on MTR in the past year. Last fall they called for a time-out on MTR permits, but soon afterward approved a mine site in West Virginia, alarming many anti-MTR activists. Last week, however, the EPA vetoed the largest proposed MTR site in the country.

Enviromentalists cheered today’s move. But as Rainforest Action’s Amanda Starbuck points out, the administration stopped short of issuing an outright ban on MTR, which many groups have called for. “Moving forward, we urge the EPA to take holistic measures to end this devastating practice once and for all,” says Starbuck. “We cannot end mountaintop removal coal mining pollution without ending mountaintop removal all together.”