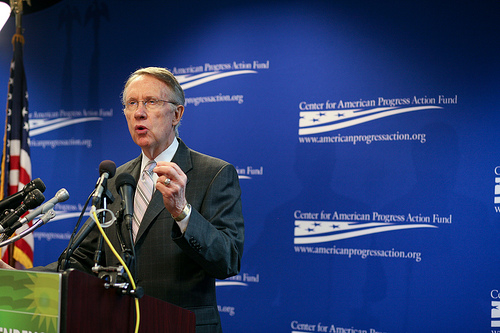 After Senate Republicans killed the Democrats’ first attempt to begin debating financial reform, members of both parties now head back to closed-door negotiations in an effort to bridge the differences between the Ds, nearly all of whom support the bill, and the Rs, who mostly don’t. Sen. Richard Shelby (R-Ala.), a top GOP player in the battle to rewrite financial regulation, told reporters after Monday’s cloture vote that he looked forward to a few more days of talks in order to reach some kind of bipartisan agreement. In the days ahead, both parties are going to “try to put that bill together,” Shelby said.

In the same breath, though, the affable Alabaman said he wanted to see more concessions from the Democrats. “What I would like to do is reach an agreement on three big sections,” he said. He didn’t elaborate on what those three “big” sections were, but it’s likely Shelby meant resolution authority (how future regulators wind down and euthanize failing big banks without bailing them out); a new consumer protection agency (GOPers and Dems have clashed over the agency’s power to write new rules); and, potentially, new oversight of derivatives (the financial products that let manufacturers and utility companies hedge risk but allow financial firms to gamble on the markets). A second cloture vote is likely to happen later on Tuesday. Are Democrats poised to concede more ground to Republicans on a bill some experts say is already miles from ideal?

The lone Democrat to break ranks during Monday’s cloture vote, Sen. Ben Nelson (D-Neb.), might force Democrats to do just that. Nelson’s “no” vote apparently resulted from the removal of a provision that would have exempted financial companies from retroactively posting collateral on existing derivatives contracts signed before the financial bill’s enactment. A major supporter of that exemption is the Oracle of Omaha, Warren Buffett, who feared that retroactive collateral would eat up large amounts of capital within his company, Berkshire Hathaway, a major player in the derivatives markets.

That exemption was reportedly killed on Monday. But if Democrats want to win over Nelson for the next cloture vote, they might have to restore the provision—and thus weaken their new derivatives rules. Not that Sen. Chris Dodd (D-Conn.), the chair of the banking committee, seems eager to cede this ground. “I was prepared to grandfather existing derivatives that have not been cleared,” Dodd said on Monday, “but I can’t very well turn around and say, ‘By the way, you don’t have to have margin requirements.'” (Margin is the amount of cash or other capital posted for a derivatives deal to cover future risks depending on how the trade turns out.)

More days spent negotiating behind closed doors also means more time for lobbyists representing Wall Street and other financial players to ply their trade. In the past week, powerful influence peddlers like the US Chamber of Commerce have flown in dozens of executives to lobby for blunting reforms on everything from derivatives to car dealers. Republicans, in particular, have allied with financial lobbyists—in high-level meetings in New York with hedge fund managers and fundraisers in Washington hosted by bank lobbyists. As long as Republicans keep debate off the Senate floor, and out of the public eye, the less likely it is the public will notice financial services industry lobbyists scurrying throughout the Capitol trying to whittle away at the bill.

In a statement after the vote, President Barack Obama described this very problem: “Some of these senators may believe that this obstruction is a good political strategy, and others may see delay as an opportunity to take this debate behind closed doors, where financial industry lobbyists can water down reform or kill it altogether.”

Senate Majority Leader Harry Reid (D-Nev.) understands this. That’s why Reid was pushing to hold a cloture vote as early as Tuesday afternoon or on Wednesday. Reid knows that closed-door negotiations favor the Republicans because it lets them oppose the bill away from public scrutiny. By forcing GOPers to block the financial bill in a very public manner, Reid is pushing them to adopt a politically toxic position, especially when two-thirds of Americans in a recent poll say they want financial reform. “By blocking us from even opening debate on how to hold Wall Street accountable, Republicans are voting to protect the big banks and their bonuses and to keep this important debate hidden from public scrutiny,” Reid said on Monday night. But forcing Republicans to side with the banks in public is only one of the challenges that Reid faces. He has to make sure that the bill doesn’t become so watered down that when it hits the floor, there’s nothing left worth fighting for.