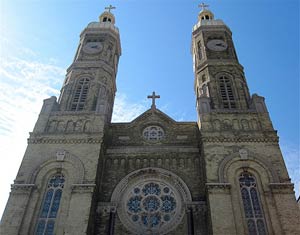 Want your tax dollars to fund someone else’s private-school, religious education? Move to Florida. Sunshine State conservatives are pushing a constitutional amendment for November that would repeal a 125-year ban on state funding for religious programs. Their argument is largely historical: the state constitution currently features what’s known as a “Blaine Amendment,” a relic of the anti-Catholic hysteria of the late 1800s (here’s a terrifying illustration from Harper’s) which prohibits any public funds for religious programs. Here‘s the language:

Proposing an amendment to the State Constitution to provide that an individual or entity may not be barred from participating in any public program because of religion and to delete the prohibition against using revenues from the public treasury directly or indirectly in aid of any church, sect, or religious denomination or in aid of any sectarian institution.

The plan isn’t as radical as it sounds—the Establishment Clause of the Constitution is still there, after all, so don’t expect Gov. Charlie Crist to replace the law code with the Book of Leviticus any time soon. Beyond that, Florida’s current statute is generally considered to be among the strictest in the union; a slight relaxation of the existing law probably wouldn’t be so bad.

What makes the case interesting, though, is that despite what its proponents say, the amendment is really not about religious freedom in the conventional sense (Florida stopped persecuting Catholics decades ago), so much as it’s about the foggier subject of using taxpayer money to indirectly subsidize tuition at private schools with a religious mission. In 2002 a Florida court struck down then-Gov. Jeb Bush’s voucher program because of the Blaine Amendment, and conservatives have viewed repeal as a necessary step ever since. Of course, while vouchers would mostly benefit Christian schools, the state would be required to give equal standing to non-Christian schools—just as Ohio’s voucher program funds the Islamic School of Oasis in Cleveland—which might not go over too well in some circles.

The proposed amendment doesn’t just address a longtime sore spot; it’s likely to be good politics: The last time conservatives won a major national election, they packed ballots with red meat referenda on the local level to drum up turnout (and capitalize on it). With 2010 looking like a conservative landslide, expect to see a lot more initiatives like this one.