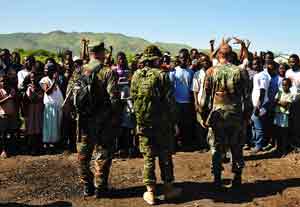 Yesterday in New York, the international donors’ conference on Haiti’s recovery hopefully helped raise billions of dollars to fund the earthquake-ravaged Caribbean country’s redevelopment—on Haiti’s own terms. According to reports in the Huffington Post and New York Times, a few main things must be accomplished for Haiti to rebuild itself: Funds must be transferred from NGOs in the country to the Haitian government (regardless of the government’s corrupt past), the country must be decentralized, and it must use its own methods and, if possible, resources to regain economic strength. The Congressional Black Caucus recently hosted a conference to review the progress of recovery efforts in Haiti, and panelists continuously repeated these sentiments.

“A democracy cannot be run by NGOs,” Rep. Yvette Clark (D-N.Y.) said, after noting that she represented the second-largest Haitian population in the US. She visited Haiti a few weeks ago and assessed the situation there:

What I witnessed on the ground in Haiti was a government made impotent by an overemphasis on the financial contributions to an NGO network, an NGO network that is not accountable to anyone other than themselves or perhaps their boards…many of the NGOs are not even registered with the Haitian government, and so the tracking and transparency that comes from the support mechanisms that they are providing are not made clear. The accountability around the financial support they’ve received is not as clear either, unless they’re registered with the US in which case we can track them…

Clark maintained that help from NGOs is not in itself a mechanism to a civil society. “I am advocating for direct financial assistance to the Haitian government. If you make the Haitian government impotent and in the view of its own people unable to provide for them, then democracy is dead.”

Clark asked President Obama to pass an executive order to establish a Haitian Enterprise Development Fund modeled after the private equity and venture capital funds financed by US foreign aid. “We need to make sure that the work that we do in Haiti is one that is inspired and is taken ownership of by Haitians in Haiti, so that the development of the civil society is authentically Haitian,” she said.

The growing divide between regular Haitians and the NGO workers sent to assist them was also highlighted in a story broadcasted on Al Jazeera English, which is worth watching in full:

At the CBC forum, Rajiv Shah, a USAID administrator, echoed Clark’s concerns. “We absolutely must prioritize a mechanism for managing resources and managing donor engagement that allows for real alignment with the government of Haiti’s strategy,” he said. “We should all be patient in how we spend those resources…Instead of rushing to do major reconstruction contracts with outside parties, we should take more time, be more deliberate, plan more carefully, and indentify local partners that can implement projects and programs. And use the influx of resources to build their critical capacities that will be necessary for Haiti to have a more vibrant future.”

Speaking of that future, Raymond Joseph, Haitian ambassador to the US, announced that “the new Haiti will have to go green.” After the earthquake hit the country, Joseph said, traffic lights were still working because they’re powered by solar panels. Joseph acknowledged the “astounding solidarity” the world has shown in helping post-quake Haiti, but he cautioned against a do-anything strategy that lacked forethought and national scale.