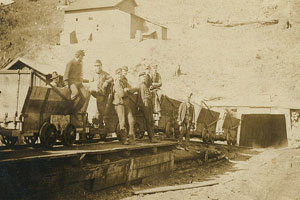 In Anderson Cooper’s CNN reports of the horror and grief following the deaths of 25 miners at Massey’s Upper Big Branch mine in West Virginia, the anchor turned to Davitt McAteer to explain what was going on.  For more than 30 years, McAteer has been there through one coal mine disaster after another, pleading for reform.

The key questions in the Massey tragedy are the same as those that were asked following the deaths of 13 miners in Sago, West Virginia, in 2006. Following that incident, many questioned why the federal government would not mount an aggressive drive to enforce safety regulations in the nation’s mines. Neither the Bush administration nor Congress showed any serious willingness to tackle this problem head on. All that came out of the investigations was passage of the Miner Act, which required mines to set up secure areas where trapped workers could seal themselves off with enough food and water to last 4 days, in the hope that rescuers could reach them in that time. The law also mandated a communications system that tracked the whereabouts of trapped miners. Only 8 percent of US mines have installed such a system in the 4 years since the law was passed, McAteer told me.

These communications systems are not rocket science. As far back as 1998, government and the mine industry were aware of technology that would allow them to stay in contact with trapped miners, as I wrote in a piece for the Village Voice following the Sago disaster:

On November 25, 1998, a fire occurred at the Cyprus Plateau Mining Corporation’s Willow Creek Mine, near Price, Utah. Here is how the Labor’s Department MSHA website described what happened there: “The shift foreman ordered an evacuation using a unique system which operates like a pager that was worn by some miners. This ‘PED’ system (Personal Emergency Device), allowed for constant contact with the miners, even those working in remote areas. After the accident, a text message was sent to the miners–‘mine fire-evacuate’. The 45 miners were safely evacuated in about 45 minutes.

Similar communications systems have been more widely used in mines in Australia and elsewhere. By one estimate, the total cost of providing PEDs for workers in a mine the size of Sago would have been about $100,000.

The Massey disaster was caused by a methane explosion. “The numbers of volume [of the gas] are just huge,” McAteer said. “[Normally] the ventilation system should take care of it. But something failed.” He continued: “There is a record of terrible practices in the mine. Terrible.” So if the government knew of these violations, why wasn’t the mine shut down? McAteer said that the government could have done so—”if they had the balls.”

McAteer has been an often-lonely crusader for mine safety reform. I remember riding with him in a car in the 1960s down the narrow roads of the Appalachian coal country at night, during the efforts to oust the corrupt boss of the United Mine Workers union, Tony Boyle. We were scared to death. We kept watching out the back window for cars tailing us. We feared that we would be run off the narrow twisting roads that cut into the hillsides, with nothing but ravines far below. I remember wishing we had a gun. That coal field struggle ended with the election of Arnold Miller, a reform candidate, but not before the leading crusader, Joseph Yablonski, and his wife and daughter were shot and killed by Boyle operatives in 1969. (Boyle was later convicted for the murders.)

McAteer took me and other reporters all over the West Virginia coal fields, from mine to mine, to black-lung protest groups, to visit working miners and their families. He talked Consolidation Coal, then the industry leader, into letting us tour one of the company’s deep mines. He was the heartbeat of the reform effort—polite, diplomatic, cheerful, and most of all persistent.

Davitt started his career as one of Nader’s Raiders in Washington in the late 1960s. He fought for change in the coalfields—a struggle that culminated in the landmark 1969 Coal Mine Health and Safety Act. In the 1970s, after Boyle had been ousted from the UMW, he led the union’s health and safety programs. From 1994 through 2000 he was Bill Clinton’s Assistant Secretary of Labor in charge of mine safety. After Sago, West Virginia governor Joe Manchin asked McAteer to conduct an independent investigation, and he later testified before Congress in hearings that led to passage of the Miner Act of 2006.

All this time, McAteer has been searching for meaning in the coal business. He conducted a historical investigation of the most terrible disaster in the nation’s history at the Monongah mine in West Virginia, where on the morning of December 6,1907, 500 men and boys were killed. They left behind hundreds of women and more than 1,000 children. It was this disaster that ultimately led to a better understanding of industrial working conditions and paved the way for the first federal coal mine act. McAteer’s 30 years of work became a book, Monongah. But as the tragic events at Massey have shown, his work is far from over.