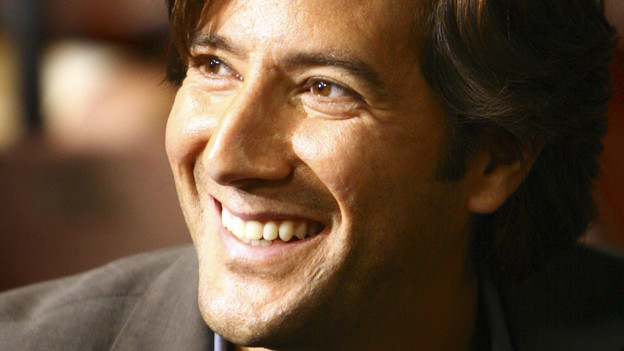 Last night’s episode of LOST, “Happily Ever After,” was one we LOST nerds have been waiting for. Finally Desmond Hume, mysterious Scot and aspiring family man, got his moment in the island sun. The episode explored Desmond’s curious abilities, and how he might be the key to the island’s future. Finally, we’re starting to figure out this mess that calls itself a tv series. We can see the light at the end of the tunnel, and it looks like, well, read below. Our guest blogger is Becky Kirsch of BuzzSugar, who gives a good episode summary here. Let’s begin!

Nikki Gloudeman, New Media Fellow: Hey guys!
Jen Phillips, Assistant Editor: Hi Nikki!
Becky Kirsch, BuzzSugar: Hi everyone!
NG: Think it’ll just be us this week, making sense of last night’s awesome episode!
BK: I’ve got the whole Buzz team on hand over here.
JP: Thank goodness, I finally feel like I’m starting to get a hold of this slippery rabbit of a show.
BK: Me too, I actually feel like I sort of understood what was happening last night. I was just relieved that there’s finally some significance to the alterna-world.

NG: The moment where Charlie put up his hand and Des saw the words “Not Pennys Boat” was one of my fave of the SERIES. It gave me chills.
BK: Me too! Especially since Charlie is one of my favorite, favorite characters (don’t hate me for saying that).
NG: This was basically the episode of favorite characters. I think Des has a heightened sense of the other world because of his exposure to EM (electromagnetic energy) on the island and whatever weird power that gave him.
JP: So Des seeing that seemed to trip his memory of the non-sideways world.
BK: The real question for me is whether or not Des remembers what’s happening in the island world when he’s in the alternate world, and vice versa.

JP: I thought of Faraday’s rabbit, whose body was in one world, but consciousness was in another.
NG: Definitely a consciousness thing. Loved the line “We need to see what’s going on with your brain.” That’s where all this is happening.
JP: I think of him as the rabbit, in Alice in Wonderland, leading other characters down the rabbit hole into the crash timeline/world.
NG: I think Desmond has dejá vu: not quite remembering, but sensing things like Jack with his appendix removal and other characters looking into mirror.
BK: Right, though at the end when he asks for the manifest it seems like he’s on a mission so that made me think he’s carrying out the island mission. I also loved the panic button tie to the button the island, even though it seemed a bit heavy handed.
JP: Ooh, I didn’t think of that!
NG: I didn’t either! So…what does Des “understand” now?

BK: Well he definitely seems more prepared to make a sacrifice, whatever that sacrifice is.
NG: Better not be Penny! I will cry, and then I’ll get embarrassed.
JP: So yeah, I’m still trying to piece together what Des’s function is to the island.
BK: We’re wondering if Jacob brought him to the island through Libby’s boat and if it wasn’t a random accident that he washed up there.
NG: Good theory Becky! Wondering why Penny’s last name was different, Milton instead of Widmore.
BK: We were reading the correlation between her last night, Milton, and John Milton who wrote Paradise Lost.
NG: Oh yeah that’s it! Love that book. And lots of resonance with LOST I think. Good v. Evil and all that jazz.

BK: Well the other interesting thing is that Daniel Faraday (aka Daniel Widmore in the flash sideways) seems to figure out that there’s something going on at the same time and Faraday was the only character other than Desmond who could time travel in the regular world.
NG: Yeah they all seem to figure it out around the same time, which is odd… is there a reason for that? Does it have to do with something happening on the island?
BK: Right, or was Desmond’s sideways flash triggered by the electromagnetism device Widmore put him in?
NG: I don’t know how they’re going to make all the time travel/EM stuff make sense. It’s pretty complicated stuff.
BK: We’ve read a few theories that the alternate world is kind of an offering to the survivors where they get their utmost wish from the MIB.
NG: Yes I’ve read that, so their “free will” is deciding between the worlds.

BK: I just want to know what’s an Easter egg and what has “greater meaning” for LOST.
NG: I remember thinking the four-toed statue foot was a random red herring. Turned out I was very, very wrong.
JP: There’s something obviously very key with Desmond. Like he is the key that’ll open the traffic between the two worlds or something. Since Desmond is Faraday’s constant, and Penny is his, maybe they all need to get together.
BK: Ooh, that’s a good point
NG: Desmond’s been called the “wild card,” so that makes sense

BK: The trailer for next week’s episode looked like Michael… zzz. I wish they’d bring Walt back. Too bad he’s like 25 now.
NG: WAAAAAAAAAAAAAALLLLTT. Yes, and 7 feet tall.
BK: Where’s Vincent these days? Did he get off the island?
JP: Yeah, what happened to that dog? Did Smokey eat him?
NG: I bet he’ll make an appearance in one of the final episode, as a nod to the fans.
BK: Maybe when they all the leave the island, the horse and Vincent and the polar bear will stand together and look off into the distance…
JP: …as the sun sets, classic!
NG: And…. end of series! Love it.

NG: Favorite moment of episode? Mine: Charlie’s hand and when Faraday said “We need to talk.”
BK: We were going to say the hand as well, but now trying to think of something equally heart wrenching and cool… oh! the whiskey. When Desmond finally gets to drink the whiskey, when earlier in the series Widmore said he’d never be a great man and thus not deserving of delicious whiskey.
NG: That moment was just all kinds of awesome
JP: Penny, not afraid to talk to strange men in the middle of the night alone in a stadium. And Faraday, ’cause I love his braininess.
NG: Though to be fair, if Desmond walked up to me in a stadium I’d be amenable to a chat as well. I think she cosmically knows him though.
BK: She could have made a run for it.
JP: But she won’t. Because they’re in loooooovvvveee!
NG: Awwww. Ok need to leave, though it pains me. Feel free to continue onward. And Becky, thank you so much for joining! And all of BuzzSugar crew!
BK: We should get back too, but it was so fun chatting with you girls! Thanks for having us!
JP: Yeah, thanks Becky! Great having some other gals to nerd out with!
JP: Ciao, bellas!
NG: Ciao, Namaste.
BK: Cheers, brotha!