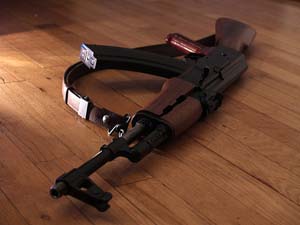 Apparently the actions of National Rifle Association member Timothy McVeigh didn’t teach the organization that its violent anti-government rhetoric can have dangerous consequences. On a day when thousands of Tea Party activists are taking to the streets to protest Tax Day, the Violence Policy Center has released a report today chronicling the increasing ties between the gun lobby and the Tea Party movement, and the NRA’s adoption of much of the “Patriot movement’s” anti-government language. The center sees direct parallels between the NRA’s current activities and those in the years leading up to McVeigh’s fateful decision to blow up the Oklahoma federal building:

“The gun lobby is once again embracing—and, equally important, validating—the anti-government rhetoric being offered by activists that range from Tea Party members, through pro-gun advocates, to members of the militia movement. And as was the case with Timothy McVeigh, the risk lies not so much with the organized members of these groups, but with the “lone wolves” who not only embrace their rhetoric, but are willing to act on it with violence.”

The report connects the NRA to the organizers of this Monday’s Second Amendment March in DC, an event the VPC finds ominous. The VPC quotes march organizer Skip Coryell, who wrote a March article in Human Events describing the event’s purpose:

My question to everyone reading this article is this: “For you, as an individual, when do you draw your saber? When do you say, “Yes, I am willing to rise up and overthrow an oppressive, totalitarian government?”…I hear the clank of metal on metal getting closer, but that’s not enough. The politicians have to hear it too. They have to hear it, and they have to believe it. Come and support me at the Second Amendment March on April 19th on the Washington Monument grounds. Let’s rattle some sabers and show the government we’re still here. We are here, and we are not silent!

The NRA is not an official sponsor of the event, but it’s provided an unofficial blessing and has helped promote the march to its members. The VPC finds the connections disturbing given that the march will feature such speakers as Larry Pratt, a Tea Party member who played a pivotal role in a 1992 meeting of racist and extremist activists in Colorado that essentially launched the modern militia movement.

The VPC also finds a big overlap between the NRA’s election volunteer coordinators and Tea Party activists in many states, and notes that the NRA has capitalized on the movement by marketing a line of “Don’t Tread on Me” T-shirts and other apparel regularly sported at Tea Party rallies. The report closes with a quote from Aitan Goelma, a former federal prosecutor who helped win convictions against McVeigh and Terry Nichols in the Oklahoma City bombing case, who told the Christian Science Monitor in March:

Anytime you have group-think and this churning of ridiculous ideas back and forth, eventually you’ll get someone like McVeigh who’s going to say ‘I’m going to take the mantle of leadership and fire the shot heard around the world and start the second American revolution…’ Some of this is fantasy. I think the idea is that it is kind of fun to talk about a UN tank on your front lawn and the New World Order…but when someone blows up a building and kills 19 kids in a day-care center, it’s not so glamorous anymore”

As the VPC report suggests, the NRA ought to think twice before egging on people who frequently talk about how the tree of liberty needs periodic watering with the blood of patriots. A few of them might start to take that line a little too seriously. It wouldn’t be surprising of some of those folks showed up next week at the Second Amendment March—an event that promises to make today’s Tax Day antics look like, well, a tea party.