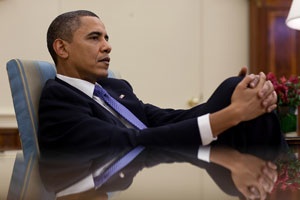 In his much-ballyhooed speech at Cooper Union in New York City—blocks away from the financial district—President Barack Obama made a strong case for his financial reform plan. With financial industry execs in the audience, he declared, “unless your business model depends on bilking people, there is little to fear from these new rules.” He explained the basics of his initiative. He urged the financial titans in the crowd to “join us, instead of fighting us in this effort.” The big laugh line came when he cited a Time magazine article reporting that the “great banking houses” were alarmed and angered by reform legislation and believed it would “reduce all US banking to its lowest level”—and then noted that this article appeared in 1933 and that the reform bill then being decried by Wall Street would create the Federal Deposit Insurance Corporation. At another point, Obama slammed the “battalions of financial industry lobbyists descending on Capitol Hill, as firms spend millions to influence the outcome of this debate. We’ve seen misleading arguments and attacks designed not to improve the bill but to weaken or kill it. And we’ve seen a bipartisan process buckle under the weight of these withering forces.”

But Obama named no names. He did what too many politicians often do when they describe how special interests game Washington; he stayed vague.

Overall, the speech was fine, but no breakthrough. Obama didn’t fully sync up with the popular anger targeted at Wall Street. He countered the main GOP talking point that the reform bill would be a permanent bailout for Wall Street firms, saying it was “not factually accurate”—but without calling out the Republican Party by name, in particular Senate minority leader Mitch McConnell, for disseminating this prevarication. With this address, Obama was obviously pressing hard for the reform package. But he’s trying to reason with the perps of the economic crisis, not slam them.

At this point, hasn’t the financial industry made it clear that it’s not interested in accepting the current reform package, which might already be too weak to do an effective job? Here was an opportunity for Obama to stare down those who are spending millions to block an initiative that he considers essential for the security of the US economy. He could have said, “Goldman Sachs, call off your lobbyists.” Or something like, “JP Morgan Chase, you have dozens of lobbyists working to destroy this bill. Enough is enough.” He could have zeroed in on specific credit card companies and mortgage firms that have been working hard to undermine the provision that would create a consumer finance protection unit.

Some might complain that such an approach could come across as mean-spirited or unfair—that a president shouldn’t pick on particular firms or people. His remarks could affect stock prices. And if he failed to mention a particular Wall Street bad guy, he could be accused of favoring that institution or person. (Moreover, enterprising reporters—and opposition researchers—would quickly compare his campaign finance contributions to the list of institutions explicitly targeted.) But a more direct confrontation could galvanize the debate—and place the foes of reform on the defensive. Perhaps the White House, sensing the GOP is easing up on its opposition to the bill, has calculated that its keep-on-plodding course will lead to victory—as it did with health care reform—and no major drama is required.

Yet the private interest lobbying machine works so well in Washington because it operates outside the glare of public scrutiny. Obama can declaim the armies of influence-peddlers storming Capitol Hill on behalf of the financial firms. But that doesn’t provide much disincentive for the Wall Streeters to withdraw. They merely have to grimace through a speech. Then it’s back to business as usual. You don’t stop a lobbyist by saying, “please.”

Whether necessary or not to ensure the bill’s passage, a more explicit assault would have political benefits. The coming congressional elections look tough for Obama and his fellow Democrats. With unemployment numbers likely to remain high, many angry voters will yearn to vote out members of the party in control. Obama and the Democrats will try in the months ahead to push various jobs initiatives. But they probably won’t be able to turn around the economy all that swiftly—and certainly not swiftly enough for impatient independents and swing voters. So the political challenge will be how best to show that they are fully on the side of Americans facing tough times.

Wall Street reform is a grand opportunity. But for this to work, Obama will have to show voters he’s truly fighting for them. How can he do that? Well, by actually fighting. If it’s true that the reform bill is necessary to prevent further economic catastrophe, then the forces attempting to thwart it deserve to be pummeled—and named. This isn’t a seminar. It isn’t even a good-faith negotiation—it’s a cage match. Obama need not be too polite.