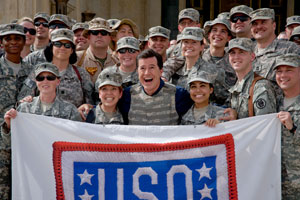 I’ve never seen Colbert so clearly become his own character on the question of impugning the honor of American soldiers. I don’t doubt that his experience with the troops affected him on this question.

This is really annoying. If Andrew really thinks Colbert is “becoming” his character on this issue, he misunderstands the show. The implication is that only someone like Colbert the character—i.e., someone who is ultraconservative to the point of parody—can instinctively jump to the defense of servicemembers. I beg to differ, as would Oliver Willis, and, I suspect, Colbert (the actor, not the character).

The moments on The Colbert Report when Colbert is most earnest are moments when you’re hearing the actor speaking. In other words, Colbert’s actually out of character when he’s defending the troops in the Assange interview. The actor’s real views are coming through, and not in the standard “parodying what a conservative might say” way that dominates most of the show. It wouldn’t make sense for Colbert to use his standard method in this situation: that only works when the liberal Colbert and his conservative character disagree. When it comes to the troops, the character and the actor are on the same page. You see the same earnestness when Colbert talks about Catholicism, and for the same reason. It’s pretty clear that Colbert the actor is a fairly devout Catholic, and his views on religion are different from those of secular liberals. Take this, from an interview with Time Out New York:

I love my Church, and I’m a Catholic who was raised by intellectuals, who were very devout. I was raised to believe that you could question the Church and still be a Catholic. What is worthy of satire is the misuse of religion for destructive or political gains. That’s totally different from the Word, the blood, the body and the Christ. His kingdom is not of this earth.

That sounds like Colbert’s religious beliefs are pretty sincerely felt—he teaches Sunday school, for heaven’s sake! Colbert’s sympathy for the troops is deeply felt, too: he was raising huge amounts of money for servicemembers well before his well-publicized “experience with the troops” in Iraq last summer. There are plenty of other (much crunchier) charities Colbert could have chosen to support, but he decided to give his money to the Yellow Ribbon fund, which helps injured servicemembers and their families. Colbert didn’t “become his character.” Quite the opposite. Not every liberal is an atheistic troop-hater. Most of us aren’t.