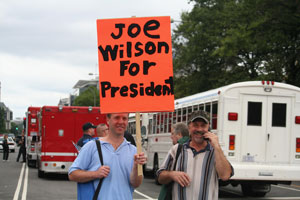 Last week, Huffington Post‘s Sam Stein looked into the results of a new Gallup Winston Group poll of members of the “Tea Party.” As it turns out, Tea Partiers are mostly white, mostly older, and very conservative. They get their news from Fox, of course. Digby says this should be obvious “to anyone with eyes.” Marc Ambinder, reporting on a Gallup poll that was released on Monday, takes the analysis a step further*:

Pay attention to terminology: it’s true that just half of those Tea Parties surveyed called themselves Republicans. Yes, the lion’s share of the other half say they’re independent. But they’re not: they’re Republican-oriented conservative voters who are dismayed by the direction of the GOP and who don’t want to identify with the party’s brand. That’s not surprising, given how tarnished that brand is. Only 8% identify as Democratic; 7% identify as liberal; 70% percent identify as conservative; two-thirds are pro-life; nearly 90% were opposed to the health care bill.

Ambinder adds that Gallup should have asked for respondents’ views on Obama (“is he a socialist?”), immigration, and race, and sought responses on policy questions (i.e., “do they support a ‘fair tax'”). Those are great suggestions, but I wanted to add a few more data points to this discussion.

The first is a story from Monday’s New York Times reporting that Tea Partiers have made Sen. Harry Reid (D-Nev.), the Senate majority leader, their “No. 1 Target” for November. That shows that while Tea Partiers often claim that they are not Republicans, they happen to share the same electoral goals as the institutional GOP.

The second point is that while the Tea Partiers’ anger and frustration are certainly real, the movement has been helped along by Fox News’ active promotion and gobs of GOP money. The Tea Party Express, which is highlighted in the Times story about Reid, is run by the Our Country Deserves Better PAC. As the Washington Independent‘s Dave Weigel has reported, OCDB’s leadership is chock-full of professional GOP operatives, including Republican political consultant Sal Russo. (The Times doesn’t see fit to mention the GOP connection until about two-thirds of the way into the story.) Howard Kaloogian, a former California assemblyman who ran the 2003 recall campaign against former California Governor Gray Davis in 2003, is also affiliated with OCDB. As Arnold Schwarzenegger fans know, Kaloogian’s quixotic recall campaign eventually succeeded—with the help of boatloads of money from GOP Rep. Darrell Issa.

None of this is to say that the Tea Parties aren’t “real.” But when the Times writes about them targeting the top Senate Democrat, it should make clear up top just how deep the connections between the Tea Party and the Grand Old Party run.