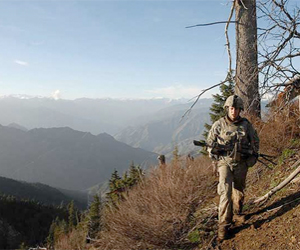 Al-Jazeera English released chilling footage Sunday of Taliban fighters overrunning a former US outpost in Afghanistan’s Korengal Valley, capturing the drama, the melodrama, and the dilemmas that attend counterinsurgency against an ideological foe.

The base—which was always small in comparison to most of the military’s forward operating bases (FOBs) in Iraq and Afghanistan—was abandoned last week by its Army residents as part of a larger strategy by the US commander there, Gen. Stanley McChrystal. It wasn’t the first such outpost that the Army has ditched, and it’s unlikely to be the last, as US forces change tack and focus on larger, less-remote urban areas of the country. “The area was once very operationally important, but appropriate to the new strategy, we are focusing our efforts on population centres,” the Army said in a press statement. In that sense, the loss of Korengal Outpost isn’t a defeat, but part of a larger advance.

Still. Forty-two US servicemembers lost their lives within those walls in five years of fighting over what’s been dubbed “the Valley of Death.” And Al-Jazeera’s video shows that the Taliban isn’t afraid to use some empty ammo cans and sandbags as part of a massive PR coup. “There’s a lot of ammunition left behind,” claims Anwar, one of the local Talibs. “Mortars, rockets, missiles. This, God willing, we will use against them.” His claims to possess US munitions and petrol are probably lying bravado. But perceived defeats in this kind of war have a wicked way of becoming more concrete.

According to the Wall Street Journal:

The Americans pulled out because they determined that instead of bringing a measure of stability to Korengal, they had largely proven “an irritant to the people,” said the top U.S. commander in Afghanistan, Gen. Stanley McChrystal.

“We’re not living in their homes, but we’re living in their valley,” Gen. McChrystal said on a visit to Korengal last week as the withdrawal was getting under way. “There was probably much more fighting here than there would have been” if U.S. troops had never come.

The Journal also explained exactly what it takes for the US military to pull out of a small outpost like the one in Korengal…and implied that matters could have been far worse, if the Taliban had truly been on the ball:

The U.S. withdrawal involved 84 runs by helicopters down the twisting, narrow gorges that lead into the valley and back out. It was kept secret to avoid tipping off the Taliban; commanders feared that if the insurgents found out the timing of the withdrawal, they would try to mass fighters and launch one last coordinated attack on the exposed and retreating soldiers.

Instead, the Taliban appeared to have missed its chance to do a final “complex” operation, Baker Company’s commander, Capt. Mark Moretti, told Gen. McChrystal during a briefing last week at the Korengal Outpost. Communications intercepts by U.S. intelligence showed the Taliban’s chief figure in the valley, Abdul Rahim, was recently across the border in Pakistan with $18,000 and trying to raise a force of 200 fighters even as the Americans pulled out.

None of that stopped the Taliban from claiming a major victory over the US-led forces. The Taliban and its sympathizers likely won’t be alone in painting Korengal’s abandonment as a loss for the US. Armchair critics of the Obama administration (think chickenhawks like Liz Cheney and Sarah Palin) are likely to decry the moves as defeatism, echoing the criticisms of one anonymous poster on the military-oriented Internet bulletin board Socnet.com:

It wasn’t too long ago I heard about the 35000 additional troops Obama planned to send over there to support the soldiers already there and make an effort to stabilize the entire country. If we’re trying to stabilize the whole country, why are we pulling out of an area which appears to me to still have a strong Taliban presence?

All I got from the article was that basically we were encountering heavy resistance for a long time in the area. Doesn’t that mean that we’re in the right place, and just need more soldiers in the region to secure it and drive out the terrorists?

That’s all well and good, being the opinion of someone—like yours truly—who has the luxury of unfettered Web access, warm dinners, and big opinions. It’s also diametrically opposed to the opinion of at least one soldier who fought at the outpost, losing half his platoon. “It confuses me, why it took so long for them to realize that we weren’t making progress up there,” he told the New York Times.

Let’s hope the right wing won’t join forces with Taliban yokels in second-guessing the generals over this business. As the Journal story made clear, our Army is now led by generals who do enough second-guessing for all of us, in terms that sometimes sound eerily similar to those the antiwar movement has used for eight years:

Asked about moving out of the valley after losing so many men here, Gen. McChrystal said: “I care deeply about everyone who’s been hurt here. But I can’t do anything about that. I can do something about people hurt in the future.”