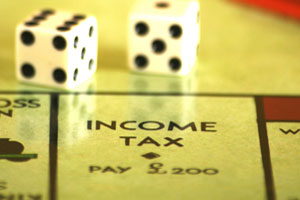 On Tuesday night, Jon Stewart had a segment that summed up what’s wrong with how the media talks about taxes. If you don’t want to watch the segment, I’ll summarize (briefly): All this week, cable news and many newspapers have highlighted a 2009 study by the Tax Policy Center that found that 47 percent of Americans have no income tax liability.

Why point to this study now? Well, tax day is Thursday, the media needed a good story, and the Drudge Report—which seems to serve as the assignment editor for 90 percent of the television producers in America—featured the story on its front page. As you may know, the Drudge Report has an agenda. And as you may suspect, the TPC study is misleading without context. Cable news is terrible at providing context. But this is one of those cases where excluding the context essentially makes the story wrong. Focusing on income taxes when you discuss Americans’ tax burden ignores the fact that most Americans pay more in payroll taxes than they do in federal income tax. The truth is that only a very small percentage of Americans pay no federal taxes—and most of those folks are paying at least some state taxes. Here’s Stewart: 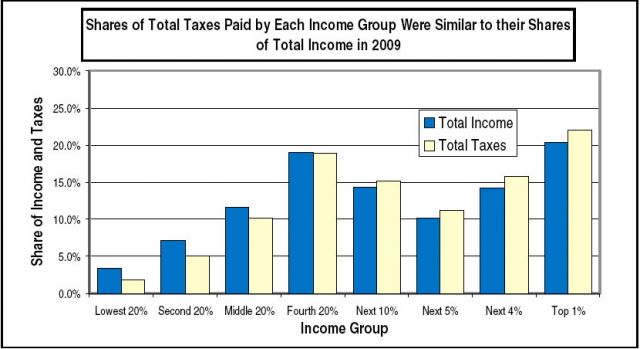 If you watched cable news this week, you would think that the top 20 percent are being treated incredibly unfairly. You’d be wrong. Ezra Klein has a theory about why the media failed so epically:

I’m going to be charitable on this and assume that people are biased toward their own experiences rather than playing loose with the data. For upper-income folks—journalists, television executives, congressmen, think tank employees—the big hit is on income taxes, so they get pretty annoyed when they hear that lots of Americans don’t pay any income tax. But their experience is not typical.

I normally admire Ezra’s restraint, but in this case it’s not warranted. Even if they’re biased toward their own experiences, media figures are really falling down on the job by pimping this study free of context. Call me old-fashioned, but I think the media have a duty to avoid fanning the flames of social division. Giving people the impression that huge numbers of Americans don’t pay any taxes is just plain irresponsible. It makes people really angry. Last year, when I traveled to Connecticut to cover the Senate race there, I met a man who believed that 50 percent of Americans didn’t pay any taxes at all. Those “zero-liability taxpayers” should be disenfranchised, he said. That’s some divisive talk.

As Stewart pointed out in Tuesday’s segment, ExxonMobil may not have any US income tax liability for 2009. But that wasn’t on the Drudge Report, so cable news didn’t cover it. Mother Jones‘ Adam Weinstein did, however. He even talked to an ExxonMobil spokesman. Check it out.

*I have replaced last year’s chart with the latest figures. This chart, like the previous one, comes from Citizens for Tax Justice report.