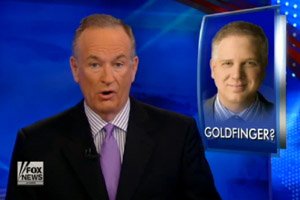 Things got heated last night when Rep. Anthony Weiner went on the O’Reilly Factor to defend his claim that Glenn Beck and his sponsor Goldline are working “hand in hand to cheat consumers”. (Video below.) Beck had appeared on the show Friday, hot dog in hand (hot dog=wiener, get it?), winning over Bill O’Reilly (who himself has promoted gold). O’Reilly told Weiner that his investigation of Goldline “smacks of a witch hunt” and that he was unfairly singling out the company because of its affiliation with Beck. Why, he wondered, if Goldline is so shady, does it get an A+ rating from the Better Business Bureau?

For his part, Weiner gave as good as he got. He explained that he’d focused on Goldline because it’s the biggest gold dealer and because it’s using Beck to “gouge” consumers with overpriced investments. He also pointed out that BBB ratings are subject to grade inflation, which O’Reilly scoffed at. “Bill, you’re being a shill for this company,” Weiner snapped. “As long as they get an A+, I’m fine with it,” O’Reilly replied.

As MoJo has reported, Beck and Goldline are not the only gold peddlers in town (even some liberal talkers have gotten in on the action). But because of Beck’s popularity, Goldline has a lot more visibility than other gold outfits. And Beck’s pitch for gold is qualitatively different than the standard “I use it and so should you” stuff that nearly all talk-radio hosts do. For Beck, gold is intimately wrapped up in his end-times schtick—if you believe his claims that the dollar is about to be destroyed by our socialist overlords, well then, you’d better get yourself some gold. In Beck’s world, gold isn’t just an investment, it’s essential to survival.

But that’s not the focus of the Weiner-Beck-O’Reilly feud. Back on the Factor, O’Reilly hinted that Weiner is working on some related legislation; so far, there’s no word on what that may be. And Weiner offered to go “mano a mano” with Beck over some “hot dogs and Beck’s beers.” O’Reilly said he’d make it happen. Game on!