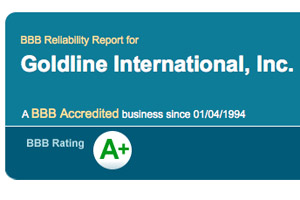 When Rep. Anthony Weiner (D-NY) released a report yesterday accusing Glenn Beck’s favorite gold company and sponsor of ripping off consumers, the company sent out a press release disputing the charges. Among the defenses it raised was Goldline’s “A+ rating” from the Better Business Bureau. Beck, too, has highlighted the BBB endorsement in his defense of Goldline. But does that rating really mean anything?

After all, a Mother Jones investigation found that more than 40 people have filed complaints against Goldline with that very same BBB, and seven of those people reported back that Goldline refused to make them whole. Goldline also engages in a few practices that don’t seem like they quite fit in with the BBB’s stated ideas about good consumer practices. For instance, Goldline requires people to sign a nondisclosure form promising never to complain publicly about the company as a condition of getting a refund. It also aggressively uses caller ID to identify incoming callers so it can call them back and pitch them more stuff just like any telemarketer. And it presses people into making “investments” in European gold coins that lose a third of their value the minute they are purchased. Does that sound like an A+ kind of business?

Well, as it turns out, it doesn’t take much more than a big fat check to the BBB to get the erstwhile consumer agency to grant a company its highest ranking. According to the Los Angeles Times, most of the bureau’s funding comes from selling “accreditations” to businesses. In a story last year, the Times found:

a random search of the organization’s database of about 4 million North American companies seems to show that the roughly 400,000 accredited businesses, even those that get numerous complaints, very often receive higher grades than unaccredited companies with spotless complaint records.

Some outraged business owners have put up their own site to complain about the LA BBB allegedly trying to squeeze money out of them to improve their ratings. So it’s no surprise, really, that Goldline has such a glowing recommendation. The company has aggressively worked to defend its public image. After dozens of people wrote up scathing complaints about the company on the Ripoff Report, Goldline joined the site’s “Corporate Advocacy” program and—voila!—the complaints are now buried under a pile of verbiage suggesting that after a thorough investigation, Ripoff Report now believes:

Goldline International commits to total customer satisfaction, pledges to address complaints & inquiries. Goldline.com commitment to Rip-off Report Corporate Advocacy Business Remediation & Customer Satisfaction Program. Goldline employees will go above and beyond the client’s expectation in the pursuit of excellence in every aspect of the business – Goldline has been helping consumers buy gold and other precious metals since 1960. They provide extensive free information to help people make informed choices when buying precious metals. – feel confident & secure when doing business with Goldline International.

And just in case that didn’t do the job, Goldline has set up its own review site filled with nothing but kind words from happy customers. Given the company’s track record in image-scrubbing, if Beck wants to shoot down Weiner’s report, he’s going to have to find better ammo than a rented endorsement from the BBB.