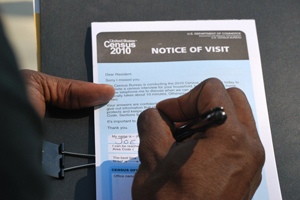 In America, you’re supposed to be innocent until proven guilty. Tell that to some of the four million people seeking jobs with the US Census, who say they were rejected for crimes they didn’t commit.

With the unemployment rate close to 10 percent, relatively high-paying census jobs are much sought after. Census-takers can earn more than $17 an hour for going door-to-door to gather data; other employees make even more. But there’s a problem with the process. The Census Bureau runs every applicant’s name through an FBI database. If the database shows the job seeker has ever been arrested, the application is put on hold, and the Census Bureau sends a letter giving the job seeker 30 days to prove that the arrest was no big deal.

Last month, two people sued the government after being denied census jobs when their applications were flagged for arrests. They argue that relying on a database of arrests—many of which never led to convictions—discriminates against black, Latino, and Native American applicants, who are statistically more likely to be arrested.

One of the plaintiffs in the case is 69-year-old Evelyn Houser, an African American retiree. Houser worked for the census in 1990, and did so well going door to door that she was promoted to a desk job. But when she applied to work for the census this year, she received a letter requesting documents related to an arrest for writing a bad check in the early 1980s. (Houser was never convicted of a crime.)

“It was confusing, because I had worked for them before,” Houser says. “Then all of a sudden this came up, and came out of left field as far as I’m concerned.” In response, Houser sent fingerprints to the Census Bureau so officials could verify she had no criminal record. But they wanted official court records and rejected her application.

A 30-day letter like the one Houser received doesn’t tell the recipient why she’s been singled out—just that her name came up in the FBI database. The Census Bureau usually won’t provide further information—about half of the records in the FBI database have no information about whether an arrest ever led to charges. And more than 35 percent of arrests never result in convictions, according to government records. “The census is eliminating people from even consideration for these jobs based on crimes they never committed,” says Samuel Miller, a lawyer for the applicants suing the bureau. (The Center for Constitutional Rights, Public Citizen, and the Lawyers’ Committee for Civil Rights are also assisting with the case.)

Some people whose names appear in the database don’t even receive the 30-day letter. If it doesn’t get sent to the correct address, an applicant could run out of time to address questions about his record even before he knows there’s a problem. That happens often, says a Census Bureau employee close to the hiring process.

If a job seeker gets the letter in time, he’s probably still out of luck. Even if he can remember where and when he was arrested, there’s no guarantee the jurisdiction will still have the relevant records. When Eugene Johnson, another plaintiff in the case, went to the New York Criminal Court to obtain records relating to his 1995 conviction for a misdemeanor assault, he eventually found that the documents had mistakenly been stamped “sealed.” He sent a letter and a form summarizing his case to the Census Bureau, but never received a reply.

“People are being treated very dishonestly because they’re not really given a chance,” the Census Bureau employee says. “Once they’ve received that letter…. chances are that they will probably never be hired.”

Census Bureau director Robert Groves told a Senate subcommittee in February that a flagged applicant would need to “conclusively demonstrate” that “he or she does not present a current threat.” But applicants aren’t warned in advance that they may need to dig up decades-old arrest records that may or may not still exist.

Other government agencies don’t apply such sweeping disqualifications to potential employees. The Transportation Security Administration, which is in charge of airport security, provides a list of specific convictions that would prevent someone from being hired. The Postal Service—another organization that, like the Census Bureau, hires people to go door-to-door—also has a specific list of exclusions based on convictions, not arrests. And if you want to buy a gun, the government uses the FBI arrest database—but the burden of proving that you are disqualified falls on the feds, not the gun-buyer. If the government fails to find the information in three days, you’re free to lock and load.

The lawsuit against the Census Bureau is especially ironic in light of the 2010 Census’ goal of doing a better job of counting minority communities accurately. On Monday, the plaintiffs asked a federal judge for a preliminary injunction that would temporarily change the Census Bureau’s hiring practices for this year. If they’re successful, the change won’t help people who’ve already been rejected—but it could help future applicants avoid disqualification and help ensure a more diverse population of census-takers.

The plaintiffs ultimately hope to get their lawsuit certified as a class action, so that all people who believe they were wrongly denied census jobs can join the complaint. They also hope to force permanent change to the bureau’s hiring practices, and to expose any other agencies using discriminatory screening. But for now, many of the people who were sifted out by the bureau’s screening remain out of work. “I was very happy that a few people had the balls to file a discrimination lawsuit because I feel that that’s right,” the census employee says. “It’s a time when the economy is bad and here is an opportunity for people to get a little work and they’re just being screwed.”