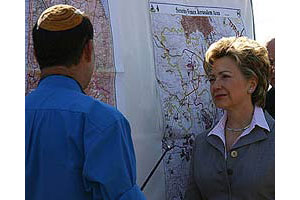 Though Senator Barack Obama has never—neither in his Senate votes nor in his campaign literature—strayed from the conventional position of support for Israel, he has in this primary season been dogged by the issue. The flare-up last week surrounding Obama’s allegedly “anti-Jewish” campaign cochairman, sparked by a piece in the conservative American Spectator magazine, was only the latest instance in which his foes have suggested that Obama has an “Israel problem.” Yet even as Obama has been subjected to intense scrutiny, Senator Hillary Clinton has received virtually no attention for taking an unconventional position on Israel (albeit in a direction approved by pro-Israel hardliners). Her vow of support for Israel’s claim on an “undivided Jerusalem,” if enacted, would mark a major—and problematic—break with longstanding U.S. policy.

Under the heading “Standing with Israel against terrorism,” Clinton’s official policy paper, released last September and currently touted on her campaign website, states, “Hillary Clinton believes that Israel’s right to exist in safety as a Jewish state, with defensible borders and an undivided Jerusalem as its capital, secure from violence and terrorism, must never be questioned.” With the phrase “an undivided Jerusalem as its capital,” Clinton seems to take a hardline position on a deeply contested facet of the Israeli-Palestinian conflict, and a position like this should have garnered at least passing interest from the mainstream media. So how come nobody’s paying attention?

The answer may lie within the long history of empty rhetoric on Jerusalem doled out by presidential candidates. Perhaps the lack of interest can be chalked up to uncertainty in how to interpret Clinton’s position. Or it may be that right-wing pronouncements that give short shrift to the Palestinian side are simply not seen as remarkable. (An exception to the media silence on Clinton’s position was the American Prospect‘s Gershom Gorenberg, an Israeli.)

Clinton is toying with one of the few most important final-status issues that will have to be resolved as part of any two-state solution. Israel captured the eastern half of Jerusalem during the 1967 Arab-Israeli War. While Israel has declared the whole of an expanded Jerusalem its capital, the international community views east Jerusalem as occupied territory and the potential capital of any future Palestinian state. In recognition of the contested status of Jerusalem, the United States and other countries maintain their embassies in Tel Aviv.

“Jerusalem is not only of political, religious, and emotional significance to Palestinians. It’s the cultural and economic capital of any future state of Palestine. To carve out east Jerusalem from the rest of Palestine would be to deprive of it the geographic area which traditionally has been the heart of the Palestinian economy,” said Philip Wilcox, a retired U.S. Foreign Service officer who served as consul general and chief of mission in Jerusalem and is now president of the Foundation for Middle East Peace, a D.C. nonprofit. “It’s an absolute deal –breaker, and there will be no peace if there isn’t an agreed political division of Jerusalem.”

If opposing a compromise on Jerusalem is a deal breaker, one would think there would be more importance attached to Clinton’s words—especially appearing in the unequivocal construction of Israel’s “right to exist” that “must never be questioned.” If Clinton did, as president, endorse Israel’s annexation of all of Jerusalem, it could mean nothing less than a repudiation of the concept of a two-state solution. And while her position mirrors that of the American Israel Public Affairs Committee (AIPAC), it actually puts her at odds with some prominent Israeli officials, notably Vice Premier Haim Ramon, who have publicly spoken about the need to cede the Arab neighborhoods of Jerusalem. One explanation for this incongruity, offered by all of the half-dozen experts I spoke to on the subject, is that Clinton’s statement is nothing more than election-year rhetoric. That is, her stand may tell us more about the fraught politics of Israel/Palestine in the United States than it does about how a Hillary Clinton administration would approach the conflict.

“I think it is said in the knowledge that this is a rhetorical commitment only. And that all past presidents once coming to office have recognized that the problem of Jerusalem is one that has to be resolved through negotiations,” Wilcox said. That interpretation would be in keeping with an old tradition of presidential candidates making empty promises on Jerusalem. A favorite, going back to Ronald Reagan, is to pledge to move the U.S. embassy to Jerusalem. Both Bill Clinton and George W. Bush made and then broke that promise and, in so doing, had to repeatedly waive the requirements of a 1995 law—of which John McCain was one of 76 Senate cosponsors—demanding the embassy be moved.

This campaign season, none of the remaining candidates seem to have made that pledge, at least publicly. Earlier this month, however, Haaretz reported that a Clinton surrogate told a Cleveland audience that Hillary Clinton would move the embassy to Jerusalem. John McCain, for his part, was quoted on his Mideast trip last week as saying that he supported Jerusalem “as the capital of Israel”—a weaker formulation than Clinton’s. His campaign did not respond to a request for comment.

So is there an electoral gain, at least perceived by the candidates and their advisers, to making these types of promises? While it’s impossible to know how many American Jews would vote on the basis of Jerusalem, the most recent American Jewish Committee poll found 58 percent opposed to compromise on the status of Jerusalem as a “united city” under Israel’s jurisdiction, putting them in line with Clinton. But the number of American Jewish voters is not that high. M.J. Rosenberg of the Israel Policy Forum, a dovish advocacy group in Washington, believes that voters simply aren’t part of Clinton’s calculus. Her Jerusalem position,” he said, is “designed to appeal to money people. The single-issue donors in the Jewish community tend to be far to the right. It’s throwing red meat out to some people who desperately want to eat some red meat. It’s not a serious commitment.”

But to discern whether Clinton is serious about moving the embassy or supporting an “undivided Jerusalem” as Israel’s capital, one has to look at the history of her position and undertake the not-so-simple task of interpreting it.

Clinton’s rhetoric dates back to when her husband was attempting to broker a compromise on the holy city. She first took the position in 1999, prior to announcing her candidacy for the U.S. Senate in New York. (It was later in the same campaign that Clinton was slammed for hugging and kissing Suha Arafat, the wife of Palestinian leader Yasser Arafat, at a ceremony on the West Bank, where Suha, speaking in Arabic, accused the Israeli government of using poison gas against Palestinian women and children. Hours after the event, Clinton condemned her.) “I personally consider Jerusalem the eternal and indivisible capital of Israel,” she wrote in a letter to the president of Union of Orthodox Jewish Congregations of America, echoing the exact language favored by some Israeli politicians. That stand was interpreted in the media as an obvious pander, a play for support among the hardline segment of New York’s sizable Jewish community. “Israel’s new friend Hillary Clinton, born-again Zionist” read the headline in her hometown paper, the Arkansas Democrat-Gazette. As Michael Tomasky later wrote in Hillary’s Turn, his book about the 2000 campaign, “The Jerusalem question is always an issue in New York campaigns, and anyone running for dogcatcher in New York signs on to the position Hillary took.”

Her position might have been New York politics as usual, but it had serious implications for her husband’s administration. A spokesman for Bill Clinton’s State Department immediately distanced the administration from her comments, saying that the “first lady was expressing her personal views” and that the U.S. position on Jerusalem—that it was a matter to be negotiated between the parties themselves—had “not changed.”

And, yet, despite Hillary Clinton’s strong words in ’99 and today, there is still linguistic wiggle room that allows her to support the idea of a Palestinian capital in east Jerusalem. “Well, [Clinton’s statement] is strong, but if people are determined to be a little bit creative in the way they interpret these things, ‘undivided’ sometimes literally means ‘don’t put the barbwire back up,'” said William Quandt, a professor of politics at the University of Virginia and a longtime observer of America’s role in the Arab-Israeli conflict. “In 1967 there was a divided Jerusalem,” he added, referring to the period before the 1967 war when Jerusalem was physically divided, a state of affairs to which no one wants to return. Clinton’s campaign did not respond to a request for clarification of her position.

Then there’s the ambiguity embedded in the very term “Jerusalem.” James Zogby, president of the Arab American Institute, notes that it can be construed several ways. “Is it Jerusalem as defined by its municipal boundaries in 1967? Is it what Israel unilaterally and illegally annexed that was recognized by no one, including the United States government? Is it the expanded greater Jerusalem that now includes the settlement belt?”

But no matter how Clinton defines the borders of Jerusalem or whether the policy paper is intended as empty rhetoric, her position is emblematic of her record on Israel. As others have pointed out, her campaign position paper on Israel doesn’t even mention a two-state solution. She virtually never utters the word “Palestinians.” Her Senate website describes her as “a leader in supporting Israel’s right to build the fence”—what others call the wall—that juts deeply into the West Bank and has been widely criticized for violating the human rights of Palestinians. She personally toured the barrier in late 2005. All this, and yet somehow Barack Obama is the only candidate whose position on Israel has drawn fire.