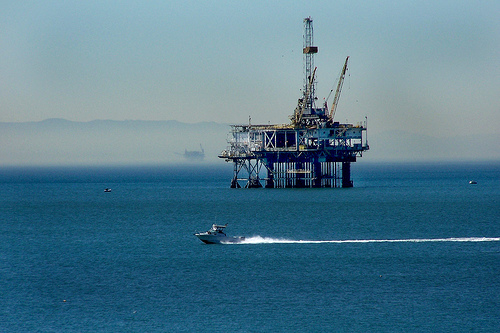 In the weeks following the Gulf of Mexico oil spill, regulators at the federal Minerals Management Service granted approval for 27 new drilling plans in the region—and exempted 26 projects from environmental review. While the Obama administration has put the brakes on new drilling, a number of exploration plans already in the works appear to have been green-lighted.

MMS, the division of the Department of Interior responsible for overseeing oil and gas development, has been criticized in recent weeks for its many regulatory failures that may have contributed to the catastrophic Deepwater Horizon spill. Last week, documents emerged that revealed that the agency waived environmental review for BP’s Deepwater exploration plan, a finding that has alarmed environmental advocates.

The Center for Biological Diversity scoured 27 offshore projects that have received a seal of approval from MMS after the April 20 explosion, and found that environmental reviews were waived in all but one of them. Twenty-six of the 27 plans were granted a “categorical exclusion” from review under the National Environmental Policy Act.

MMS granted approval for another BP exploration project in the Gulf, even after the Deepwater disaster was underway. On May 6, MMS approved BP’s exploration plan for the Green Canyon area of the Gulf, a site approximately 124 miles from the coast of Terrebonne Parish, La.

BP’s plans indicate that it had not planned for a potential incident like the one currently unfolding in the Gulf. Under the section for “blowout scenario,” BP’s plan indicates that the information was “not required.” The plan also indicates that, “No alternatives to the proposed activities were considered to reduce environmental impacts.”

As for planning in case of a spill, BP’s documents indicate that, “No mitigation measures other than those required by regulation will be employed to avoid, diminish, or eliminate potential impacts on environmental resources.” While the plan lists some potential adverse impacts from a spill, the report also notes:

Due to the distance from shore and the available oil spill response capabilities, no adverse impacts to wetlands are anticipated as a result of the proposed activities. Activities proposed in the EP will be covered by BP’s Oil Spill Response Plan (OSRP).

The inadequacy of BP’s spill response has become painfully clear in the past weeks. The leading option for stemming the flow from the undersea well, a giant dome, failed over the weekend. Now BP says it is going to try a smaller dome. And in an even more bizarre alternative plan, the possibility of plugging the leak using a “junk shot”—or shoving debris like golf balls and shredded tires down the well—has also been floated.

“The MMS has learned absolutely nothing from this national catastrophe,” CBD executive director Kierán Suckling said in a statement.