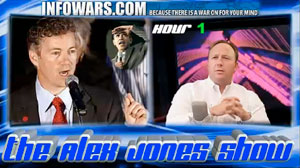 Rand Paul, after winning the Kentucky Republican Senate primary on Tuesday, has run into reality—that is, the gap between his political and policy positions and mainstream notions. The Tea Party darling hit immediate trouble when he defended holding his victory celebration at a private country club by citing Tiger Woods. More serious, appearing on Rachel Maddow’s show, Paul noted that he would not have fully endorsed the Civil Rights Act of 1964. That is because he doesn’t support the government infringing upon property rights—such as the right of a business owner to discriminate on the basis of race.

Paul, like his father Ron (the libertarian Republican congressman), fancies himself a strict constitutionalist opposed to globalists and what he and others in the so-called “Patriot movement” call the New World Order. And this view of politics has led Paul to keep unusual company—such as his appearances on the radio show of Alex Jones, an anti-government conspiracy theorist and one of the more prominent proponents of the idea that the Bush administration was complicit in the 9/11 attacks.

Jones, who sees big government conspiracies elsewhere, as well, has been an enthusiastic supporter of both Ron and Rand Paul. Both men have appeared on his show, which, of course, doesn’t mean they endorse his 9/11 views and other opinions. (Last December, Rand Paul’s campaign communications director, Chris Hightower, resigned after a blogger exposed Hightower as an anti-Christian who believed that the US government was responsible for 9/11. The Paul campaign, asked by a local newspaper, if Paul agreed with Hightower on 9/11, said it was a “complicated situation” with “truth on both sides.”) But Rand Paul has shown sympathy for Jones’ overall view of a world of global conspiracies, and he has expressed support for some of Jones’ unconventional ideas.

During a July 23, 2009 show, Jones, decrying the Wall Street bailout, asked Paul, “This isn’t really socialism….Isn’t this more akin to fascism?” Paul replied, “You’re exactly right.” Later on the show, while Jones was denouncing cap-and-trade legislation (which he says could lead to “toilet paper taxes”) and calling for investigating Al Gore, Paul noted that should the climate bill become law, “we will have an army of armed EPA agents–thousands of them.” These EPA troopers, according to Paul, would be free to burst into homes and apartments to determine if they were meeting energy-efficiency standards.

Paul also didn’t say anything when Jones raised an odd charge about the Federal Reserve. During a rant about the Fed, Jones claimed “we know that the Federal Reserve was clearly implicated in the kidnapping of a congressman’s baby” and commended Paul for his “courage” in taking on the Fed.  Paul replied, “I appreciate that,” and he told Jones that he could not mount his Senate run “without you.”

Throughout this particular show, Paul graciously accepted Jones’ support for his pending Senate candidacy. He gave the impression that he and Jones were like-minded foes of the globalists and international financiers plotting to undermine, if not destroy, the United States for their own gain. And Paul noted that career politicians are no match for this enemy force: “the ones that evolve to the top of the Republican and the Democratic Party end up being the people who don’t believe in anything…and they get pushed around by the New World Order types.”

A month later, Paul was again a guest on Jones’ show. “I can’t stress enough how important this race for the Kentucky senator is,” Jones exclaimed. Paul replied, “You’re right.”