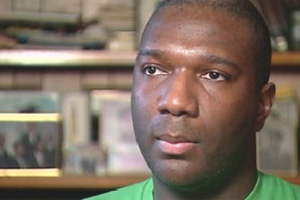 South Carolina’s Senate primary is drawing increasing scrutiny as officials are still struggling to explain Alvin Greene’s upset victory. But despite the mounting pressure and attacks on his campaign, Greene has adamantly refused to drop out of the race—and tells Mother Jones that he expects the Democratic Party to get behind him.

“I still need the Democratic Party’s support and leadership. I should be treated like every other nominee,” Greene said on Monday, when asked whether he had received any campaign contributions since he won the primary last week. Green added that he had “some folks helping me” with campaigning, though he declined to specify who those individuals were.

Greene, who has given an increasingly bizarre series of interviews to the national media, indicates that he’s trying to sharpen his campaign rhetoric. “I’m the best candidate in the US race for Senate,” Greene said. “Hold on, let me get this right—I’m the best candidate in the United States race in South Carolina. And let’s stop my opponent and the Republicans from reversing forward progress in South Carolina.”

When asked about the attempts by his primary opponent Vic Rawl to contest the results of the election, Greene cut me off and hung up the phone.

Earlier on Monday, Rawl filed a protest with the South Carolina Democratic Party demanding an investigation of the results. A statement from Rawl said there was “a cloud over Tuesday election,” alleging that early analysis had indicated “irregularities” and that the campaign had received reports of “extremely unusual incidents” at the polls.

“These range from voters who repeatedly pressed the screen for me only to have the other candidate’s name appear, to poll workers who had to change program cards multiple times, to at least one voter in the Republican primary who had the Democratic U.S. Senate race appear on her ballot,” Rawl said in the statement, prompting voters who had experienced problems to call the campaign’s “Election Integrity Hotline.” Rawl’s campaign also noted that there was a strange disparity between the absentee votes, who favored Rawl, and the in-person ballots, as well as long-standing troubles with South Carolina’s touch-screen voting machines. (Political scientists and electoral experts are also scratching their heads to explain Greene’s win. Check out their latest theories at fivethirtyeight and The Monkey Cage.)

Citizens for Responsibility and Ethics in Washington, a watchdog group, is also planning to file a complaint on Tuesday against Greene and other candidates for failing to file requisite campaign finance reports with the Federal Election Commission.

Meanwhile, the accuser behind Greene’s felony obscenity charge and her mother are making good on their promise to go on the attack against the candidate, making their first broadcast TV appearance this weekend on Fox News this weekend. As TPM explains, the charge against Greene is extremely unusual—though the obscenity law is on the books across the country, it’s rarely enforced. The accuser, Camille McCoy, is a white Republican, and Greene is black—a reality that will surely prompt even more questions about South Carolina’s mystery man.