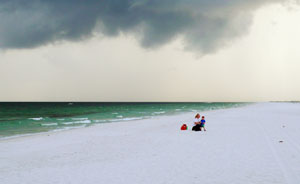 Florida is the new front in the ever-widening disaster stemming from BP’s oil spill in the Gulf of Mexico, a now 44-day-old calamity sending tar balls and slicks onto beaches and into marshes. Yesterday, oil was identified in regions off Florida’s coast still open for fishing, and oil from BP’s Deepwater Horizon rig is expected to wash onto Florida’s white-sand shores as early as Friday. Are BP and government agencies prepared?

Local officials contacted by Mother Jones don’t think so. The Pensacola area, in the westernmost tip of the Florida Panhandle, is among the first locales in the state expected to be hit by oil. Escambia County, which includes Pensacola, boasts 36 miles of beaches, according to county commissioner Grover Robertson. County officials said on Thursday that some oil was as close as seven miles off the county’s shoreline, and that the majority of the oil was about 35 miles away.

But Robertson says he’s “concerned” that BP and the multiple government agencies that make up the Unified Command organization (the Coast Guard, the Army Corps of Engineers, the Environmental Protection Agency, and the National Oceanic and Atmospheric Administration) aren’t ready for the oil’s onslaught. Robertson said Escambia County had secured the help of about 300 volunteers, via the Unified Command, some of whom will divide into teams of 10 to act as spotters for when the oil hits. After that happens, those spotters will dig up the sand absorbing the oil washed ashore. The county also plans to use tractors and sifters to extract oil from sand. Still, Robertson says, “We are very concerned that [Unified Command] will not get this done in a timely manner.”

Buck Lee, executive director from the Santa Rosa Island Authority, which oversees eight miles of Pensacola beaches, was even more skeptical. For starters, Lee said the speed at which Unified Command operated was frustratingly slow. “When you got BP looking to see how much needs to be done, that’s one of the big problems there,” Robertson says.

Robertson said he’d received a slew of ideas from experts on how to deal with the oil if and when it hits his beaches. Absorbent mats on the beach to soak up the oil. Tractors with special filters that pull out the oil but leave the sand intact. But sending a clean-up proposal to Unified Command is a lot like sending it “down the Alice and Wonderland hole,” he says. “We don’t know what happens to it.”

And the help Unified Command has offered is far from encouraging, Lee says. Referring to the teams of 10 that Robertson described, he doubts they’ll be adequate for the task of dredging up miles of oily sand. “The only thing BP has planned, if oil gets on our beaches, they have ten-man crews to walk the beaches, shovel it up, and put it in garbage bags,” he says. “We have eight-and-a-half miles of beach. Ten people stooped over shoveling is not going to cut it.”

On the Unified Command’s website, Pensacola is listed as one of 17 vulnerable areas on the organization’s radar where officials are attempting to prevent major oil impacts. Admiral Thad Allen said on Wednesday that a Coast Guard cutter ship was stationed off the coast of Pensacola “working around the clock to skim oil from the surface.” (A request for further comment and response to Robertson and Lee’s criticism was not returned by Unified Command’s press office.)

Will that be enough? Escambia County’s Grover Robertson says his county doesn’t have the money to roll out a broad response, and that the county is depending on BP and the government to do more: “We want to see the priority being protecting the citizens of Florida—not protecting BP’s bottom line.”