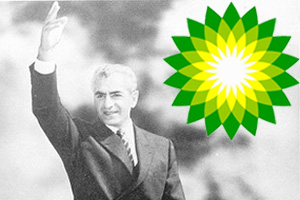 To frustrated Americans who have begun boycotting BP: Welcome to the club. It’s great not to be the only member any more!

Does boycotting BP really make sense? Perhaps not. After all, many BP filling stations are actually owned by local people, not the corporation itself. Besides, when you’re filling up at a Shell or ExxonMobil station, it’s hard to feel much sense of moral triumph. Nonetheless, I reserve my right to drive by BP stations. I started doing it long before this year’s oil spill in the Gulf of Mexico.

My decision not to give this company my business came after I learned about its role in another kind of “spill” entirely—the destruction of Iran’s democracy more than half a century ago.

The history of the company we now call BP has, over the last 100 years, traced the arc of transnational capitalism. Its roots lie in the early years of the twentieth century when a wealthy bon vivant named William Knox D’Arcy decided, with encouragement from the British government, to begin looking for oil in Iran. He struck a concession agreement with the dissolute Iranian monarchy, using the proven expedient of bribing the three Iranians negotiating with him.

Under this contract, which he designed, D’Arcy was to own whatever oil he found in Iran and pay the government just 16% of any profits he made—never allowing any Iranian to review his accounting. After his first strike in 1908, he became sole owner of the entire ocean of oil that lies beneath Iran’s soil. No one else was allowed to drill for, refine, extract, or sell “Iranian” oil.

“Fortune brought us a prize from fairyland beyond our wildest dreams,” Winston Churchill, who became First Lord of the Admiralty in 1911, wrote later. “Mastery itself was the prize of the venture.”

Soon afterward, the British government bought the D’Arcy concession, which it named the Anglo-Persian Oil Company. It then built the world’s biggest refinery at the port of Abadan on the Persian Gulf. From the 1920s into the 1940s, Britain’s standard of living was supported by oil from Iran. British cars, trucks, and buses ran on cheap Iranian oil. Factories throughout Britain were fueled by oil from Iran. The Royal Navy, which projected British power all over the world, powered its ships with Iranian oil.

After World War II, the winds of nationalism and anti-colonialism blew through the developing world. In Iran, nationalism meant one thing: we’ve got to take back our oil. Driven by this passion, Parliament voted on April 28, 1951, to choose its most passionate champion of oil nationalization, Mohammad Mossadegh, as prime minister. Days later, it unanimously approved his bill nationalizing the oil company. Mossadegh promised that, henceforth, oil profits would be used to develop Iran, not enrich Britain.

This oil company was the most lucrative British enterprise anywhere on the planet. To the British, nationalization seemed, at first, like some kind of immense joke, a step so absurdly contrary to the unwritten rules of the world that it could hardly be real. Early in this confrontation, the directors of the Anglo-Iranian Oil Company and their partners in Britain’s government settled on their strategy: no mediation, no compromise, no acceptance of nationalization in any form.

The British took a series of steps meant to push Mossadegh off his nationalist path.

They withdrew their technicians from Abadan, blockaded the port, cut off exports of vital goods to Iran, froze the country’s hard-currency accounts in British banks, and tried to win anti-Iran resolutions from the U.N. and the World Court. This campaign only intensified Iranian determination. Finally, the British turned to Washington and asked for a favor: please overthrow this madman for us so we can have our oil company back.

American President Dwight D. Eisenhower, encouraged by his Secretary of State John Foster Dulles, a lifelong defender of transnational corporate power, agreed to send the Central Intelligence Agency in to depose Mossadegh. The operation took less than a month in the summer of 1953. It was the first time the CIA had ever overthrown a government.

At first, this seemed like a remarkably successful covert operation. The West had deposed a leader it didn’t like, and replaced him with someone who would perform as bidden—Mohammad Reza Shah Pahlavi.

From the perspective of history, though, it is clear that Operation Ajax, as the operation was code-named, had devastating effects. It not only brought down Mossadegh’s government, but ended democracy in Iran. It returned the Shah to his Peacock Throne. His increasing repression set off the explosion of the late 1970s, which brought to power Ayatollah Khomeini and the bitterly anti-Western regime that has been in control ever since.

The oil company re-branded itself as British Petroleum, BP Amoco, and then, in 2000, BP. During its decades in Iran, it had operated as it pleased, with little regard for the interests of local people. This corporate tradition has evidently remained strong.

Many Americans are outraged by the relentless images of oil gushing into Gulf waters from the Deepwater Horizon well, and by the corporate recklessness that allowed this spill to happen. Those who know Iranian history have been less surprised.

Stephen Kinzer is a veteran foreign correspondent and the author of Bitter Fruit and Overthrow, among other works. His newest book is Reset: Iran, Turkey, and America’s Future.