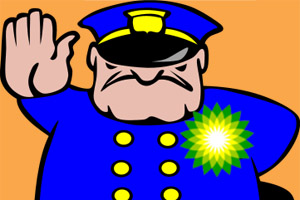 Some updates on the incident I reported on last week, in which an off-duty Louisiana sheriff’s deputy working for BP’s private security detail harassed an environmental activist who was neither on BP’s property nor breaking any laws. (Watch the video at the end of this post.)

First, some gratifying news: The ACLU has put Louisiana law enforcement on notice. In a letter (PDF) released yesterday, Marjorie Esman, executive director of the group’s Louisiana chapter, reminded the sheriffs of the coastal parishes that “members of the public have the right under the First Amendment to the U.S. Constitution to film, record, photograph, and document anything they observe in a public place. No one—neither law enforcement nor a private corporation—has the legal right to interfere with public access to public places or the recording of activities that occur there. Nor may law enforcement officials cooperate with private companies in denying such access to the public.”

Esman told me that the ACLU had discussed the matter due in large part to Mother Jones‘ reporting. She says it would consider filing a lawsuit if appropriate.

Louisiana police don’t have any right to tell you you can’t walk onto a public beach (even to, as Esman puts it, “roll around in sticky gunky tar that I’ll never be able to get off—if I want to, that’s my right”). However, they do have the right to mislead you about who they’re really working for. In Louisiana, as in many places, it’s legal for police officers to wear their uniforms regardless of whether they’re acting in an official capacity or working for a private corporation. Which is why Andrew Wheelan, the environmentalist mentioned above, was unaware that the cop who pressured him to stop filming a BP building and later pulled him over so that a BP official could question him wasn’t on duty at the time. The Terrebonne Parish Sheriff’s Office told me that the deputy who pulled Wheelan over is just one of 40 in the parish who are working for BP on their own time. And the BP-police collusion goes beyond uniformed deputies moonlighting. In nearby Lafourche Parish, for example, the sheriff’s office is filling 57 security positions a week for BP; the shifts are on the clock, and BP reimburses the sheriff’s office for them.

There’s been a lot of to-do about the federal government being officially in charge of all things oil-spill related, and Mother Jones ruffled some feathers by quoting a BP rep who said the company had a lot of sway over local sheriff’s departments. But there you have it, plain as day: Down here, many cops do literally work for BP.

Seem like a conflict of interest, or even sort of scary? Perhaps. But, as Esman points out, it’s perfectly legal. “BP doesn’t have the right to just decide they’re going to take over a public street,” she says. “They do not have the authority to tell people they can’t document what they see. But they do have the right to hire these deputies. There’s nothing we can do about that.”