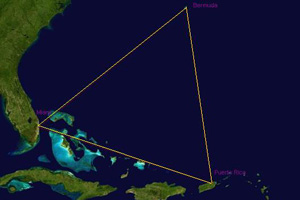 What went wrong with BP’s Deepwater Horizon project? Well, it seems the problem was either the Bermuda Triangle, or maybe the Jews.

I suppose this is not unpredictable, but conspiracy theorists—including a leading white supremacist—have latched on to the eco-tragedy in the Gulf of Mexico. Richard Hoagland has long claimed that advanced civilizations have existed on the moon. (His Wikipedia entry states plainly, “Hoagland does not have any scientific training.”) Now he’s pushing a notion that’s more down-to-earth. Energy investment adviser Christian DeHaemer blogged about Hoagland’s latest:

I recently heard a recording of Richard Hoagland…Mr. Hoagland has suggested that there are cracks in the ocean floor, and that pressure at the base of the wellhead is approximately 100,000 psi.

Furthermore, geologists believe there are another 4-5 cracks or fissions in the well. Upon using a GPS and Depth finder system, experts have discovered a large gas bubble, 15-20 miles across and tens of feet high, under the ocean floor.

These bubbles are common. Many believe they have caused the sinking of ships and planes in the Bermuda Triangle.

That said, a bubble this large — if able to escape from under the ocean floor through a crack — would cause a gas explosion that Mr. Hoagland likens to Mt. St. Helens…only under water.

The BP well is 50 miles from Louisiana. Its release would send a toxic cloud over populated areas. The explosion would also sink any ships and oil structures in the vicinity and create a tsunami which would head toward Florida at 600 mph.

Now, many people have called Hoagland a fringe thinker and a conspiracy theorist. And they may be right… But that doesn’t mean he isn’t on to something.

At some point the drilled hole in the earth will enlarge itself beneath the wellhead to weaken the area the wellhead rests upon. The intense pressure will then push the wellhead off the hole allowing a direct unrestricted flow of oil, etc.

The hole will continue to increase in size allowing more and more oil to rise into the Gulf. After several billion barrels of oil have been released, the pressure within the massive cavity five miles beneath the ocean floor will begin to normalize.

This will allow the water, under the intense pressure at 1 mile deep, to be forced into the hole and the cavity where the oil was. The temperature at that depth is near 400 degrees, possibly more.

The water will be vaporized and turned into steam, creating an enormous amount of force, lifting the Gulf floor. It is difficult to know how much water will go down to the core and therefore, its not possible to fully calculate the rise of the floor.

The tsunami wave this will create will be anywhere from 20 to 80 feet high, possibly more. Then the floor will fall into the now vacant chamber. This is how nature will seal the hole.

Depending on the height of the tsunami, the ocean debris, oil, and existing structures that will be washed away on shore and inland, will leave the area from 50 to 200 miles inland devoid of life. Even if the debris is cleaned up, the contaminants that will be in the ground and water supply will prohibit re-population of these areas for an unknown number of years.

When he’s not ranting at BP and the “Marxist Obama administration,” Wickstrom writes about Jews drinking the blood of innocent children.

Actually, more somber-minded people are fretting about possible apocalyptic consequences of the oil leak. The Coast Guard has raised questions about the wellhead’s ability to contain the oil beneath it. (That is, the wellhead could break further, and this could lead to a greater flood of oil—perhaps 100,000 barrels a day.) Environmentalists and scientists fear that the spill—with or without a total wellhead collapse—could turn the Gulf of Mexico into one large dead zone. In a world despoiled by BP, even the conspiracy kooks have real nightmares to worry about.