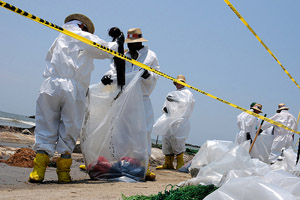 Last week, seven oil-spill clean-up workers were hospitalized after reporting nausea, headaches, dizziness, and chest pains. Doctors said the symptoms could have been caused by airborne chemical exposure while cleaning up oil slicks. The workers’ families have blamed chemicals in the dispersants being used to break up the oil. However, BP has said that air quality tests done at the clean-up sites before the workers fell ill found nothing unusual; it first blamed the workers’ condition on fatigue and sun exposure. BP CEO Tony Hayward has since chalked up the workers’ conditions to food poisoning: “I am sure they were genuinely ill, but whether it was anything to do with dispersants and oil, whether it was food poisoning or some other reason for them being ill, you know, there’s a—food poisoning is surely a big issue when you’ve got a concentration of this number of people in temporary camps, temporary accommodations.”

The possibility that the clean-up workers’ were suffering from chemical exposure is a reminder of just how weak our chemical regulations are. Last month, the President’s Cancer Panel reported that more than 80,000 industrial chemicals are used in the United States and about 700 new ones are introduced annually—yet very few are tested for potential health or environmental impacts before they hit the market. The panel found that those most vulnerable to chemical exposure are migrant workers, children, and blue collar workers—like those cleaning up BP’s mess in the Gulf.

The panel suggested that the US adopt a precautionary approach similar to the one employed by the European Union, which tries to screen out dangerous chemicals before they hit the market. Under our current system, chemicals are considered innocent until proven guilty. Laws protecting trade secrets prevent access to important information that might determine if a chemical is harmful. And if a chemical does appear to pose a risk, the burden of proof is on the EPA, which often has its hands tied. In April, Senator Frank Lautenberg (D-N.J.) introduced a bill that would amend the archaic Toxic Substance Control Act of 1976 to be more precautionary than reactionary. “America’s system for regulating industrial chemicals is broken,” he said. The bill is hanging out in the Committee on Environment and Public Works, awaiting further action.