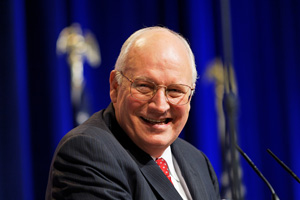 Dick Cheney hasn’t made much time for television appearances lately. But in the weeks since the Deepwater Horizon unleashed a torrent of oil on the Gulf of Mexico, his name has been creeping back into the press. “The truth is that right now we have precisely the regulatory system that the Bush-Cheney administration wanted: full of loopholes, full of cronies and lobbyists filling the very agencies that are supposed to be overseeing the industry,” liberal commentator Arianna Huffington said on ABC’s This Week last Sunday.  Cheney’s daughter, Liz, was on hand to defend her father. “Arianna, I don’t know what planet you live on,” she shot back. “What you are saying has no relationship to the truth, no relationship to the facts.”

The reality is a lot more complicated than that. Many of the policy and regulatory failures that laid the groundwork for the BP catastrophe can be traced back to the Bush-Cheney era. But so far, this question has received relatively little attention—mostly because the task force that developed the former administration’s energy policy operated in extreme secrecy. Did the task force’s decisions play a role in the BP spill? And could the Gulf disaster finally provoke new scrutiny of the task force’s clandestine workings?

The energy task force was created days after onetime oilman George W. Bush took office in 2001, and was headed by Cheney, a former CEO at Halliburton, one of the world’s largest providers of oilfield products and services. For months, the task force solicited input on US energy policy. On May 16, 2001, the group issued its final report, which was submitted to Congress in June. But the participants and details of the discussions were kept tightly under wraps.

The open-government group Judicial Watch tried to pry details of the task force’s deliberations from the administration in June, arguing that the sessions qualified as public information under the Federal Advisory Committee Act and the open-meetings law. The US General Accounting Office (GAO), the investigative arm of Congress, also sought information on which industry executives and lobbyists had attended the gatherings.

But in the first of many clashes over presidential secrecy, the White House rejected those requests, arguing that it was entitled to conduct the meetings behind closed doors thanks to executive privilege. Judicial Watch and the Sierra Club sued, but the Supreme Court ultimately sided with the administration. Though some information has trickled out in the years since, the vast majority of the task force’s deliberations remain hidden from the public eye.

Here’s what we know about the task force and offshore drilling. The Natural Resources Defense Council, an environmental group, was able to obtain 13,500 pages of heavily redacted documents that gave a glimpse into the role industry leaders played in shaping the administration’s policies (NRDC also got a list of the documents (PDF) that the administration refused to turn over). In July 2007, the Washington Post got a list of the roughly 300 groups and individuals who met with task force staffers and, in some cases, Cheney himself.

BP officials were among those who “gave detailed energy policy recommendations” to the administration, though when that fact came to light, the company refused to comment on those meetings. We still don’t know what specific policy areas BP execs weighed in on. Perhaps it’s little surprise that BP recently hired Cheney’s former press secretary, a public defender of the secret task force, to help the company with crisis communication after the spill.

But we do have a few more details about other oil industry players in the talks. Chevron’s CEO contributed a detailed list(PDF) of ways in which the government could “eliminate federal barriers to increased energy supplies”—many of which were incorporated in the task force’s final report. This included recommendations to ease federal permitting rules for energy development and a request that the administration support opening up new areas of the eastern Gulf of Mexico for offshore oil and gas development. Doing so, wrote Chevron CEO David O’Reilly, would “demonstrate a commitment to reject unjustified opposition to new energy leasing and development.”

The American Petroleum Institute offered its own long list of suggestions for energy policy. A March 20, 2001, email from API to an official at the Energy Department included a draft executive order calling for all federal agencies to issue a detailed statement on any regulatory action that “adversely affects energy supply, distribution or use.” It was nearly identical to the order Bush issued just two months later.

Many of the recommendations from the task force report were adopted in the 2005 Energy Policy Act. That legislation provided $6 billion in subsidies for oil and gas development. Royalty payments for oil and gas development were waived in several regions of the US. Some companies were allowed to pay royalties with oil, rather than money—a less transparent system that was more vulnerable to abuse. The bill also provided $1.5 billion in direct payments to companies to incentivize drilling in deepwater wells, and curtailed the power of states to oversee oil and gas exploration off their coasts under the Coastal Zone Management Act.

In addition, the bill weakened environmental protections for offshore drilling, making it easier to exclude a broad range of exploration and drilling activities from analysis under the National Environmental Policy Act. This has been cited as the reason that the Deepwater Horizon site was not subjected to a thorough environmental analysis.

The task force’s final report also presented a rosy picture of the offshore drilling industry. Newer oil and gas drilling methods, it said, “practically eliminate spills from offshore platforms” and “enhance worker safety, lower risk of blowouts, and provide better protection of groundwater resources.” The report advocated lifting the moratorium on portions of the outer continental shelf, noting that “concerns over the potential impacts of oil spills have been a major factor behind imposition of the OCS moratoria.” Bush lifted the executive moratorium in 2008, and the Democratic-controlled Congress allowed its own moratorium to expire.

But there’s a lot we still don’t know. The task force recommendations included scaling back regulations and oversight of offshore drilling while expanding incentive programs and access to resources, many of which would come to pass in future legislation. But how much the task force may have guided decisions at federal agencies—in particular the notoriously lax Minerals Management Service (MMS)—is unclear. The administration’s directives across the agencies actively discouraged any regulations or oversight that might hinder development of resources.

Among the many questions is what role the task force may have played in a 2003 decision by the MMS not to require offshore rigs to install an acoustic shut-off switch, a remote-controlled backup system that seals off an underwater well even if the rig above is destroyed. Countries like Norway and Brazil require this precaution, and MMS considered doing the same. But oil companies complained that the $500,000 devices were too expensive and, they argued, ineffective. Ultimately, MMS made the switches optional. The Deepwater Horizon was not outfitted with such a device, which could have prevented the spill. Other concerns include a failure to implement new cementing policies or act on known concerns about key components on drilling rigs.

The Department of Justice has launched criminal and civil investigations into the disaster, while a presidential commission is looking into both the spill and offshore drilling policy in general. That  commission currently lacks subpoena power, though there’s an effort underway in Congress to grant the commission that power. Numerous congressional committees have also launched probes of the spill. A congressional aide working for one of those committees indicated that there has been some discussion of revisiting the task force in those investigations, though no concrete steps to do so have been taken.

Open government advocates say this might be the appropriate time to push for more information about his task force. Mandy Smithberger, an investigator at the Project on Government Oversight, says that it’s “definitely a ripe time” to find out more about what went on in the meetings. “I don’t think you can understand how we got to where we are without looking back,” she says.

“When you have a disaster of this magnitude, it raises the question, if in this whole secretive process, what was discussed, how much did the Bush administration ignore, how much did they allow the oil and gas industry to basically do what they wanted,” says AnneWeismann, chief counsel at Citizens for Ethics and Responsibility in Washington. “Secrecy is so pernicious that it can continue to damage even when the administration is not in power.”