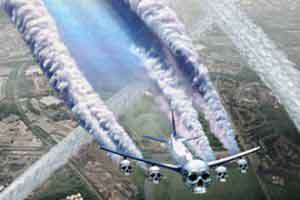 So, you recycle. You drive a Prius. You commute by train. You buy CFLs. You line-dry your clothes and bring cloth bags to the grocery store.

And you also fly, so all those other efforts go down the tubes.

It’s hard to reconcile an ecoconscious lifestyle with air travel: How can we give up flying, which those who can afford it have come to consider almost a birthright, a familial duty, the key to our freedom and even to our identity? That’s what Christie Aschwanden was struggling with when she resolved—by choice, not lack of means—to spend a year within 100 miles of her home. (The year is up, and she’s still within that radius.) Her story “Jet Blues” is inspiring yet also disturbing; given our selfish natures, you wonder, will we ever be able to turn the climate around? After all, if people who fancy themselves environmentalists can’t make the necessary sacrifices, what hope is there for those who don’t?

The piece is thought-provoking, and its commenters have raised some questions worth addressing. What about trains and buses? And what about diet? Christie’s story ran with this chart, which illustrates how the carbon cost of a family’s cross-country flight can wipe out steps they’ve taken to reduce their footprint. This, of course, was a sampling used to make a point. There are indeed other ways a family could go further to counterbalance its travel. Here’s a few more:

These annual numbers, from various sources, depend upon assumptions such as size of house (living in a smaller house is another way to save) and frequency of doing laundry. They don’t account for the carbon cost of, say, manufacturing the new windows/furnace.

Let’s single out another option raised by a commenter: Going vegan. I called up Gidon Eschel, a geophysicist who studies environmental effects of food production, for an estimate. He figures going vegan lowers a family’s footprint by about 1,500 pounds of CO2 per person per year.

This isn’t as straightforward as it might sound. First off, there are logistical challenges to putting kids on a vegan diet if they, say, refuse to eat legumes and chick peas and other nonmeat protein sources. (My daughter is mainly vegan by temperament, and she’s picky, so it’s a struggle to make sure she gets enough protein.) But there are other reasons the calculation isn’t straightforward, and those have to do with how food is processed, and with something called nutritional efficiency—basically energy in versus energy out. For instance, eggs are a more energy-efficient source of calories than spinach. Kiera Butler explores the diet conundrum in our July/August print edition, which you can get now if you subscribe here. (It’s only 10 bucks a year, fer chrissake.)

To go with Christie’s story, we were also considering a chart that looked at the impact of a single trip depending on which mode of transport you used. It’s actually difficult to directly compare the airline industry’s climate impacts to that of other forms of transportation, since aircraft emissions take place higher in the atmosphere where their effects are magnified. That’s according to Anja Kollmuss, a climate-change scientist at the Stockholm Environment Institute whom Aschwanden interviewed. Airplanes can also create contrails, little cirrus-like clouds that temporarily trap heat. Travel carbon calculators sometimes account for these issues by using a multiplier, but different calculators use different formulas, since there’s no one number that fits every circumstance. We used Atmosfair, which Kollmuss calls “one of the most rigorous calculators out there.”

The way these things are calculated, you can lower the air-travel impact by sticking with coach. That’s because there are theoretically more passengers per trip. It’s not as though an airplane’s seats are reconfigured based on your decision; in short, it has to do with long-term demand pressures: If people stop flying business- or first-class then the airlines presumably will offer fewer such seats. In any case, it’s more efficient to fly direct; commuter flights are least efficient of all, because a disproportionate amount of fuel is consumed during takeoff and landing. The following figures for plane, train, and bus, assume all seats are occupied. The car calculations are for the entire vehicle, so you can do the math: solo driver bad, carpool better.

*Aygo is a high-mileage European model. Flight numbers come from Atmosfair website. Bus, train, and car numbers calculated for Christie Aschwanden by Atmosfair’s David Lübking, who assumes a diesel bus with 50 seats that gets about 4 miles/gallon fully loaded, and uses a German train for his calculation. So it’s not a perfect calculation for the US, but close enough.