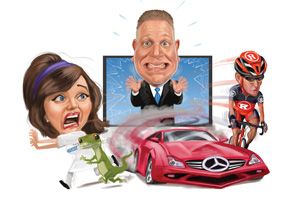 A few minutes past 7 a.m. last July 28, the sofa-sitting triumvirate on Fox News Channel’s Fox & Friends were giggling over a segment about a bodybuilder when Glenn Beck appeared at the edge of the set, his arm curled in a mock flex. Seeing Beck, cohost Steve Doocy switched the subject to President Barack Obama’s upcoming White House “beer fest” with Harvard professor Henry Louis Gates Jr. and the police officer who had arrested Gates outside his home nearly two weeks earlier. Obama had called the racially charged episode a “teachable moment” and was under fire from Beck and other conservative commentators for saying the police had “acted stupidly.”

“That is unbelievable!” Beck shot back. When cohost Brian Kilmeade asked him to elaborate, Beck presented his theory: “This president, I think, has exposed himself as a guy, over and over and over again, who has a deep-seated hatred for white people, or the white culture, I don’t know what it is.”

Kilmeade stammered that Obama couldn’t hate white people, since his staff included many of them. Beck brushed the argument aside. “This guy is, I believe, a racist,” he said, criticizing Obama for surrounding himself with people like green-jobs czar Van Jones, “a black nationalist who is also an avowed communist.”

“As soon as we saw the video, we knew,” says James Rucker, the director of ColorOfChange.org, an Oakland, California-based online civil rights group that had already challenged the racial tone on Fox News. “Beck’s comments about the president perfectly captured what has been going on at the network for a long time. It just took it to another level.” The episode presented an opportunity for making a bigger statement. “If we could get well-known companies to visualize their brand being associated with what was coming out of Beck’s mouth, we knew they would be very uncomfortable, and we presumed that they’d want to excuse themselves from Beck’s circle fast,” Rucker says.

Rucker had founded Color of Change in September 2005 along with Van Jones, who was well known for his work on police accountability and criminal-justice reform in the Bay Area. Rucker, then the director of grassroots mobilization at MoveOn.org, hoped to create a group that would bring digital organizing to “black, brown, or low-income” communities. Within four years of its launch, Color of Change had become the country’s dominant online civil rights organization, with more than 600,000 members.

Shortly after Beck’s comments, Color of Change urged its supporters to contact corporate offices. The first victory came soon afterward, as Lawyers.com, Procter & Gamble, and Progressive insurance pulled their ads from Beck’s show. Over the next two weeks, a large cluster of major brands including Best Buy, cvs, Wal-Mart, and RadioShack joined the list. “At first it was all a little shocking,” says Rucker. “But when we hit 20 companies, we started to realize we could go for everybody…The campaign became self-reinforcing by creating a public story that there was something seriously wrong with this guy.”

Beck never addressed the widening boycott directly, but his war on Jones escalated. Over an eight-week period in the late summer and early autumn of 2009, Beck would mention Jones nearly 200 times on TV alone.To Beck’s critics, the host was attacking Jones as a stand-in for Color of Change; to his supporters, Color of Change was attacking Beck on behalf of Jones (and the White House). Rucker says the boycott had nothing to do with Beck’s animosity toward Jones. (Jones had left Color of Change in 2008.)

As the summer came to a close, Beck’s persecution complex went into overdrive. “Watch the show tonight,” he begged his radio listeners. “You may not save my life. But you will be responsible for saving the republic. They need to destroy me because I’m on to them.” He brought the same message to his Fox audience. The appeals worked: Even as advertisers fled, Beck was clocking record audience numbers.

On September 5, Van Jones offered his resignation to the White House, brought down by a blogger who’d publicized a petition Jones had signed calling for an investigation into whether the Bush administration “may have deliberately allowed the September 11th attacks to occur.” Beck took the credit for Jones’ fall. “We will continue to demand answers,” he promised. “This is not over.”

But in one respect, it was. By October 2009, Mercedes-Benz, Discover, Capital One, and more than 75 other companies had said they would not advertise with Beck. As of May 2010, only a tiny handful of his original advertisers were still with him. Dish Network is the only blue-chip brand in the bunch.

Glenn Beck’s ad roster became a rump of direct-marketing companies, gold dealers (most notably Goldline), “free” credit-score sites, seed banks, ideological allies such as The Weekly Standard and TeaPartyExpress.org, and corporate fronts including Americans Against Food Taxes and the American Coalition for Clean Coal Electricity. Many of the remaining ads have been reminiscent of Saturday Night Live ad parodies. For example, the Egg Genie—”Eggzactly what you’ve been waiting for!”

Some of Beck’s B-listers have been downright scammy. This March, the Federal Trade Commission and 35 attorneys general levied a $12 million fine against LifeLock for making false claims about its identity theft protection program. In May, Texas’ attorney general charged TaxMasters, a tax-relief service, with ripping off consumers. Both had been regular advertisers on Beck’s show.

Fox News maintains that the mass advertiser defection from Beck has not impacted its bottom line (many advertisers simply moved their ads to other Fox shows). Early in the Color of Change campaign, some critics expressed hope that the channel would drop Beck if he became a financial liability. But that was never likely. Beck is the future of the network, its fresh face for the post-O’Reilly era. His value cannot be quantified by ad revenue alone.