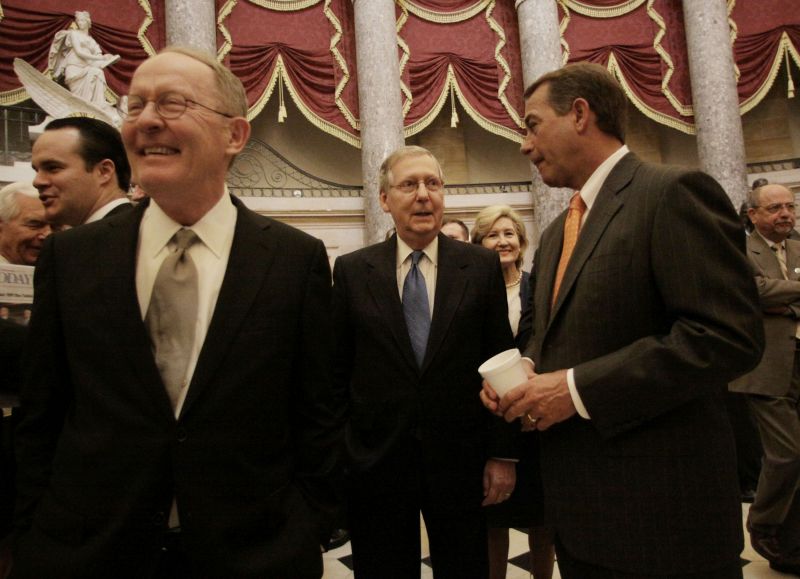 Elected Democrats haven’t been shy about slamming BP for the horrific oil spill in the Gulf of Mexico. Last month, Senate majority leader Harry Reid emotionally declared on the Senate floor that the oil company’s “greed led to 11 horrific and unnecessary deaths. It has harmed an enormous tourism industry, threatened business at countless fisheries and disrupted life for many along the Gulf Coast. As the pollution grows worse, those consequences will only compound.” This week, House Speaker Nancy Pelosi blasted the petro-giant: “We have been told that the technology is such that we could go all the way down, miles into the sea…and that this was safe. Nobody said, ‘But if it doesn’t work, we don’t have the faintest idea what to do.'” President Barack Obama has decried the “scandalously close relationship” between oil firms (like BP) and federal regulators, noted that he is “furious” that BP “didn’t think through the consequences of their action,” and raised the prospect of a criminal investigation targeting BP.

As for the top Republicans in Washington, they’ve hardly said boo about BP. When it comes to the Gulf tragedy, there’s been a partisan outrage gap.

Let’s look at House minority leader John Boehner. He’s an active tweeter, but how many times has he mentioned BP on his Twitter feed? None. Unless you count a May 12 tweet about a USA Today editorial that urged politicians not to use the spill as an excuse to stop drilling. His congressional website blog has had no postings on BP or the spill. Boehner has called for BP to bear the entire financial burden of clean-up. But he has refrained from criticizing the company. Yet he has not hesitated to blame the Obama administration for “not fulfilling their responsibility to the people of the Gulf Coast area or the people of the United States.”

Rep. Eric Cantor (R-Va.), the minority whip, has followed his leader’s example. He has not tweeted a negative word about BP. And he’s blamed Obama for imposing a quasi-moratorium on drilling and for blaming others: “Pointing fingers, placing blame, and reversing previously made policy decisions is not the kind of leadership people want and deserve in times of crisis.” Rep. Jim Sensenbrenner, the senior GOPer on the House select committee on energy independence (which is chaired by Democrat Rep. Ed Markey, a fierce critic of BP), has not fired any noticeable shots at BP.

GOP Senate leader Mitch McConnell has also refrained from slapping BP. Last month, he appeared on Meet the Press and emphasized the “administration’s involvement in this” more than BP’s role. He, too, chastised Obama for spending “a whole lot of time pointing the finger at” BP. McConnell argued vigorously against lifting the cap on BP’s liability. Sen. John McCain (R-Ariz.), an active Twitterer, has not tweeted about the spill. His Senate office has issued no press releases regarding the spill.

In May, Sen. James Inhofe (R-Okla.), the senior Republican on the environment and public works committee, attended two hearings that the committee held on the spill. In each of his opening statements, Inhofe, long a supporter of the oil industry and a global warming denialist, did not say anything about BP. He griped that the Exxon Valdez spill of 1989 “was politicized, and continues to be politicized, by certain activist groups bent on blocking access to America’s domestic resources.” Inhofe did note that that if there was “gross negligence or other violations of federal law on the part of oil companies or their subcontractors, then we will hold them accountable.” He just didn’t mention BP or the others by name.

For leading Republicans, it seems BP practically stands for Beyond Pronouncing.