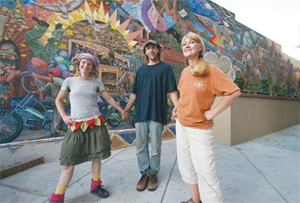 What can you say about Arizona that hasn’t already been said here, and here, and here? A lot, apparently. The state that gave us SB 1070, black helicopters on the border, and Dodge City redux—all in little over a month—appeared late last week to have navigated its last swirling circle around the porcelain that lines the drain of common sense and decency. That’s when a street mural in Prescott, Arizona, depicting a diverse group of children who attend Miller Valley Elementary School, was set to be whitewashed—literally. In order to please a bunch of motorists who just couldn’t face another day of looking at two-dimensional brown people, the principal had ordered the offending dark faces to be lightened.

Today, though, comes news that this small part of Prescott history won’t be painted over. Yet. The school district head and the principal, confronted with a crowd of protesters, made a dramatic about-face and announced by bullhorn that the mural would remain as is. “Miller Valley made made a mistake,” said principal Jeff Lane. “When we asked R. [the artist] to lighten the mural, we made a mistake.” (To which one protester yelled, “YOU made the mistake!”)

While creating the mural, “We consistently, for two months, had people shouting racial slander from their cars,” said artist R.E. Wall of the Prescott Downtown Mural Project. “We had children painting with us, and here come these yells of (epithet for Blacks) and (epithet for Hispanics).”

I assume you can fill in those blanks.

That racist rabble found focus in the person of Steve Blair, a city councilman and local AM radio host, who used the airwaves to wage his war on Krylon paint. After insisting, “I am not a racist individual,” on his radio show, Blair added the inevitable “but” of a racist:

But I will tell you depicting a black guy in the middle of that mural, based upon who’s president of the United States today and based upon the history of this community, when I grew up we had four black families—who I have been very good friends with for years – to depict the biggest picture on that building as a black person, I would have to ask the question, ‘Why?’

Actually, the painted child in question is Latino, according to the local paper—and like all the kids depicted, he’s real. Some of them even helped paint it. In fact, the school is so diverse, its parent newsletters are bilingual (PDF). Blair’s comments say less about the mural, or the actual Prescott, than they do about him and his racially sanitized vision for the city. Not coincidentally, he lost his radio gig over the weekend, too.

This local victory of common sense, though, portends a larger battle for the national soul. Blair’s public racism is only possible because of the new movement in muscular Americanism; it begins with anger over “illegal immigration” but quickly turns to caterwauling about “anchor babies,” US citizenship laws, that American victim of the Gaza raid, and the old suspicions about President Obama as a whitey-hating Muslim alien. Marry that with the new popularity of the art-based conspiracy theory—a favorite pastime of Glenn Beck, inspired by Dan Brown’s Da Vinci Code and the bane of every professionally trained art historian and conservator—and you get a tin-foil-hats-and-black-helicopters account of a mural’s creation that would be funny, if it weren’t being propagated by an angry pitchforks, torches, and nooses crowd.