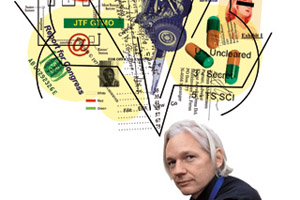 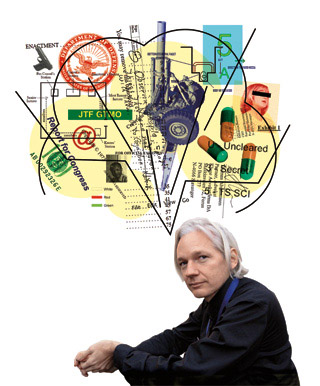 The New Yorker has a fascinating new profile of Julian Assange, the mastermind behind WikiLeaks. Raffi Khatchadourian’s piece is full of revelations about the enigmatic hacker-turned-“open-government activist”, from details of his peripatetic childhood to an exclusive glimpse of Assange at work on the “Collateral Murder” video of an American Army helicopter shooting journalists and civilians in Baghdad.

Check it out—but also check out MoJo‘s controversial profile of Assange by David Kushner, which has just been updated and expanded. Like Kushner, Khatchadourian concludes that Assange’s attempts to shine light on evildoers while lurking in the shadows is deeply contradictory: “The thing that he seems to detest most—power with accountability—is encoded in the site’s DNA, and will only become more pronounced as WikiLeaks evolves into a real institution.”

Perhaps the most interesting tidbit in the New Yorker story is its discussion of how WikiLeaks got its start. When WikiLeaks was in the planning stages in 2006, Assange said that he had more than 1 million documents; a claim that convinced Cryptome founder Jon Young that Assange was either exaggerating or up to no good. But now it seems that Assange did have his hands on a large, questionably obtained, cache of material. Khatchadourian reports that one WikiLeaks activist had access to a “tranche” of secret government documents obtained by Chinese hackers. The documents had been pulled off of Tor, the anonymizing network that WikiLeaks now encourages its leakers to use to stymie “internet spies.” According to the New Yorker, WikiLeaks posted only a few of those swiped documents. If it’s accurate, this anecdote raises some serious ethical and technical questions about how WikiLeaks operates. Does WikiLeaks condone this kind of online snooping? Has it relied upon it since its launch? Just how many of the senstive documents it’s posted were genuinely leaked and how many were hacked?

From Assange’s response, the only thing that’s clear is that (yet again) questioning WikiLeaks’ M.O. makes him tetchy. He seemed to approve of the New Yorker piece, re-tweeting its assertion that “Some WikiLeaks documents were siphoned off of Chinese hackers’ activities”—a detail that helps its noble-hacker mystique. However, after Wired looked into the Tor issue, Assange tweeted that its “beatup on WL&Tor” had “no new info”: “Don’t be fooled.” The Register found this micro-denial “sketchy”; in a comment to the site, Assange implied that Wired and the New Yorker had gotten the Tor story wrong, but didn’t elaborate on whether WikiLeaks had in fact gotten its start with documents taken from the privacy network.

Perhaps the New Yorker misinterpreted the geekery behind WikiLeaks; perhaps Khatchadourian got stuck in Assange’s web of plausible deniablility. Either way, a more detailed response from Assange would go a long way toward clearing the air. As Ryan Sholin writes, “Is it OK to hack Tor in the name of the public good?…I have a hard time trusting Tor or WikiLeaks right now.”*

Update: I’ve emailed Khatchadourian to see if his description of the WikiLeaks-Tor episode still stands. I also emailed Assange twice, asking him to verify or correct what the New Yorker reported. To which he replied, “Get a life,” and, “Go do something useful and difficult for a change.”