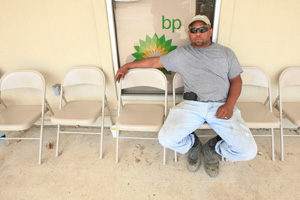 On Saturday, the head of Louisiana’s Department of Children and Family Services sent a letter to Ken Feinberg, the federal government’s oil-spill compensation czar, informing him that BP has slashed its payments to 40,000 Gulf Coast residents who have taken an economic hit from the disaster. This morning, BP issued a statement saying that news reports citing the 40,000 figure were inaccurate; the actual number, it said, was 4,000.

Those news reports got their stats right out of the DCFS letter to Feinberg. So where did DCFS get the 40,000 figure? From BP. “It was in a face-to-face meeting,” Trey Williams, DCFS’s communications director, told me after I read him BP’s statement. (BP sent it to me after repeated requests for comment; Williams hadn’t yet heard from the company.) When I pointed out that it seemed that BP was implying the DCFS people present at that meeting had misheard, he thought that was pretty funny, in a sad and frustrating way.

BP spokesman John Curry says he doesn’t know whether the company originally gave DCFS a bad estimate or if DCFS just misunderstood. Either way, he says, “We’ve taken a look, and it’s only about 4,000 that will be affected.” The company says it is only cutting off claimants who haven’t turned in required paperwork.

Altogether, some 100,000 people are receiving loss-of-income checks from BP. The initial payment to a fishing boat captain was $5,000 a month; deckhands got $2,500. As of July 1, recpients who haven’t submitted adequate proof of income get $1,000 a month. The problem, according to DCFS’s letter, is that BP does not consider many claimants’ records acceptable. The department wants the oil company to accept “alternative forms of documentation,” such as records from the state Department of Wildlife and Fisheries.

Curry says BP hopes to work with claimants to get their payments back up to previous amounts. “We are committed to making it right,” he says. “We’d prefer it get down to zero people with reduced payments. Even one is one too many.”

But keeping the checks coming isn’t enough. Even before BP’s recent payment cuts went into effect, “The checks just aren’t covering what these people normally would have made,” says Corinne Knight, associate communications director of Catholic Charities New Orleans. The DCFS’s letter to Feinberg echoes that concern. The department also says that BP has sent payments to only half of the people who have requested them and hasn’t hired enough claims adjusters to efficiently deal with the demand. Additionally, it says BP didn’t notify any state authorities that it would be cutting some payments and only writes more claims checks in periods of heavy official pressure.

In the meantime, the disaster’s victims are struggling. Last week, Catholic Charities New Orleans alone was serving 17,000 people. “We’re providing a lot of direct financial assistance,” says Knight. The organization’s five Louisiana oil-spill relief centers help cover rent and utilities and dole out $100 grocery vouchers. They started disseminating them via a lottery system to keep people from standing outside for four or five hours in the middle of the night to be first in line for the limited number. But the upshot is the same: Every day, plenty of families who need the vouchers don’t get them. A coalition of 30 nonprofits providing essential relief has applied for a $12 million grant from the BP. Knight says that the money, if received, will cover all of 90 days of assistance.