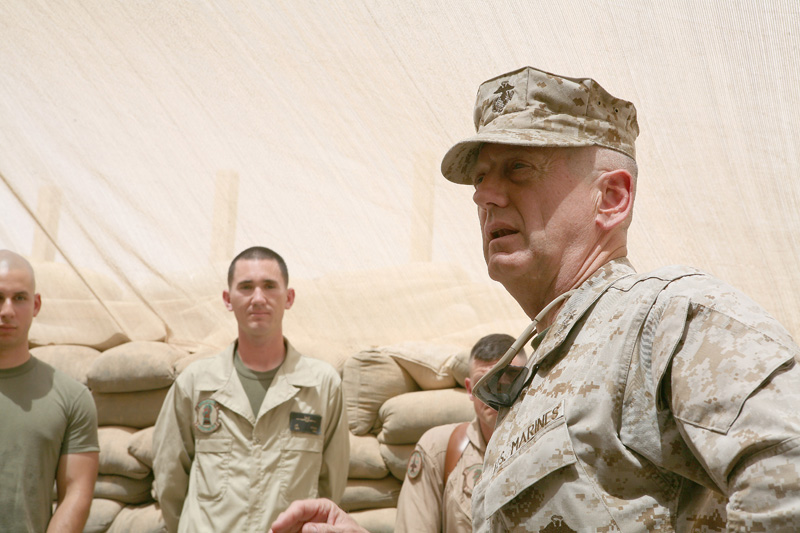 So…is it possible the White House had it planned all along?

When Gen. Stanley McChrystal handed his Afghanistan job over to doctor of philosophy and rock star Gen. David Petraeus last month, it raised a big question: What would happen with Petraeus’ old post at the top of US Central Command? To head for Kabul, Petraeus had to relinquish his CENTCOM crown—and oversight of both the Afghan and Iraq wars—with no obvious successor on the horizon.

We now know who’ll succeed him. Defense Secretary Robert Gates today announced that he wants a Marine general, James Mattis, to take over the CENTCOM post. This, according to Military.com and the AP, is an eyebrow-raiser:

He is a bit of a surprising pick. On the one hand, Mattis has significant ground combat experience and is considered an intellectual who grasps the nuances of fighting a complicated counterinsurgency.

But he is also known to speak bluntly and off-the-cuff—much like Petraeus‘ predecessor Gen. McChrystal who was fired for speaking ill of his civilian bosses.

Except that if you look back to events in June, Mattis’ pick is totally understandable; in fact, it raises a bigger question: Could the Obama administration and the Pentagon have planned McChrystal’s firing and Petraeus’ move, well before McChrystal’s controversial Rolling Stone profile came out?

Here’s what we know:

1) Mattis is something of a God to his Marines.

2) Many people were disappointed and surprised when Mattis didn’t get command over the entire Marine Corps on June 21. He’d been considered a favorite to take over as the Marine commandant, a position that’s seen as the pinnacle of a devil-dog officer’s career. Yet in an unprecedented move, Gates and the White House picked an aviator over Mattis for the commandant’s position—meaning if the tough-talking general didn’t get another four-star billet quickly, his career would be over.

3) The very next day, June 22, the Rolling Stone story hit the media cycle, and McChrystal was recalled to Washington.

4) On June 23, McChrystal was out and Petraeus was headed for Afghanistan.

5) Mattis just happened to be available now to replace Petraeus in Tampa.

What’s it all mean? There’s a possibility—albeit slight—that the DOD and White House purposely passed Mattis over for the Marine commandant’s job, knowing that he’d have bigger shoes to fill at CENTCOM when Petraeus was sent to relieve the doomed McChrystal in Afghanistan. Which would mean that Gates (a former CIA guy) and possibly President Obama weren’t blindsided at all by McChrystal’s gaffe; they could have been planning for life in the Pentagon without him before Rolling Stone ran its takedown.

From the standpoint of the strategy in Afghanistan and Iraq, there’s no question that Mattis is a smart pick for the job. He’s worked well with Petraeus in the past, and both have made counterinsurgency (COIN)—with its dictum of “first, do no harm”—their watchword. And despite his obvious attraction to COIN, Mattis is what Marines call a hard-charger—a tough, brawling kind of guy. (In fact, his pugnacious words have gotten him in hot water before.) While soldiers in Afghanistan seemed demoralized at times over McChrystal’s restrained approach to rules of engagement, Mattis might be the sort of motivator who will promulgate similarly considered rules while keeping his fired up about the mission.

So it might all be a fortunate coincidence that Mattis and Petraeus were free to play musical generals. Or it may be that the Obama administration’s national security establishment is far more calculating than its detractors give it credit for.

In any case, perhaps Gates, Petraeus, and Mattis themselves can shed some further light on the shakeup.