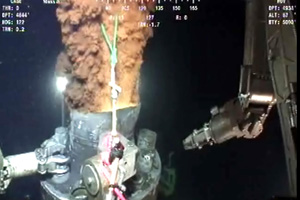 BP reports this afternoon that, for the first time in 86 days, they have stopped the flow of oil from gushing into the Gulf of Mexico. BP vice president Kent Wells said at a news conference Thursday afternoon that oil stopped flowing into the Gulf at 2:25 p.m. CDT, after they successfully closed the new containment dome.

Obviously, this is a huge success, but optimism should be cautious; they’re still testing to make sure that the cap doesn’t cause too much pressure on the wellhead (which could cause it to break even more). And the gusher won’t actually be stopped until the well is plugged. As I reported earlier, it’s still not clear when the relief wells might be successful in finally plugging the gusher, the only long-term solution.

Mac McClelland, Julia Whitty, and I will stay stay on top of this news and keep you updated. One question I’m trying to get answered is whether this means we’ll actually get an real estimate of how much oil has been leaking into the Gulf for the past three months.

Significant progress has been made on the capping stack installation. As a result of that progress, BP will perform a “Well Integrity Test” tomorrow morning. This test involves closing one or more of the valves on the new cap for a period of time to allow BP to measure pressures in the well.

It also requires that the Helix Producer and Q4000 collection systems be ramped down and placed in standby mode during the test. The measurements that will be taken during this test will provide valuable information about the condition of the well below the sea level and help determine whether or not it is possible to shut the well for a period of time, such as during a hurricane or bad weather, between now and when the relief wells are complete.

I have reviewed the protocols for this test, in consultation with the government science team. The test will likely last anywhere from 6-48 hours or more depending on the measurements that are observed. BP will be in regular contact with the government during the test, and the government will halt the test if the risks of doing further damage to the surrounding formation are significant.

Once the test has concluded, collection of the oil will resume.