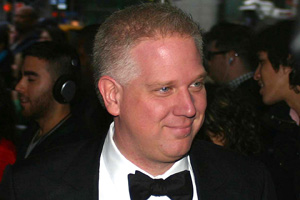 Have you got an extra $75,000 burning a hole in your pocket? Maybe you’d like to give it to Glenn Beck, who in return will fly you over New York City in a helicopter to the Westchester airport, where his chauffer will drive you to Beck’s house in Connecticut and Mrs. Beck will make everyone dinner. That all assumes, of course, that you can pass a stringent background check first. The helicopter ride and dinner with the famous talk-show host is but one of the many Beck-centric offerings available for auction as part of Beck’s “Restoring Honor” extravaganza on the National Mall next month.

Beck has chosen to host a rally on the steps of the Lincoln Memorial (pending a permit from the Park Service) on August 28, the very day and place that Martin Luther King Jr. gave his “I have a dream” speech 47 years ago. (Alexander Zaitchik has a good rundown here of why this is particularly offensive.) The rally, also headlined by Sarah Palin, is ostensibly focused on American troops and designed to raise money for the Special Operations Warrior Foundation, which helps the families of service members killed or injured in the line of duty. Money raised from the auction will go to SOWF, but only after all the expenses for the rally have been covered. (The rally is estimated to cost $2 million, and SOWF says it has already netted that much from the event.)

Of course, “Restoring Honor” is really all about Beck. The logo for the event has a drawing of him sheathed in light like he’s the second coming of Christ. By far the biggest ticket item in the auction is the dinner with Beck, and there are tons of Beck memorabilia and books in the mix, but there are some other interesting items up for grabs.

Political junkies might be interested in lunch with Karl Rove, who can be had for a mere $7,500—$500 less than a scholarship to the online version of Jerry Fallwell’s Liberty University. A tour of the Capitol with Minnesota Rep. Michele Bachman is up to $13,000. Now that Arizona has become the subject of boycotts and its sports teams are suffering, Beck is apparently doing his part to fill some seats. There are lots of Arizona Diamondbacks packages to bid on, including a luxury suite for 18 people going for a mere $1,000. By far the most novel item up for bid is the autographed bag used by Kiefer Sutherland in the shooting of 24: Redemption in Africa, going for $1,200—far more than the autographed copy of South Carolina Sen. and tea party fave Jim DeMint’s book, Saving Freedom.

No doubt this says something about Beck fans (though I’m not sure what), but a copy of Beck’s book, Arguing with Idiots, that both Beck and former green jobs czar Van Jones signed, is a strangely hot item, up to $4,250 by Thursday afternoon. The one signed by Beck and former Weatherman Bill Ayers is only fetching $1,600.

The home page of the auction site also touts VIP tickets to see shows featuring Bill Cosby and Ellen DeGeneres, both of whom seem unlikely candidates for a Beck auction. As it turns out, at least as of Thursday night, you can’t actually bid on those. Don’t worry, though. You can still bid on the recently added giant statute of the Ten Commandments, much like the one that used to grace the courtroom of former Alabama chief justice Roy Moore. That rock is going for $2,750.

If you want dibs on all this great stuff, you’d better hurry! The auction ends 3 p.m. Monday.