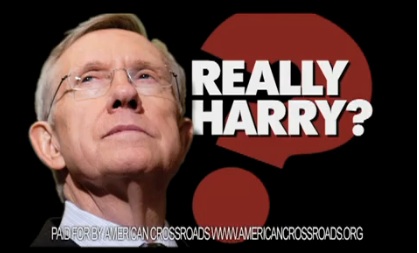 There’s a new TV attack ad on the airwaves in Nevada ripping Senate Majority Leader Harry Reid for, well, just about everything he’s done in the past two years. The 30-second spot essentially blames Reid for Nevada’s nation-leading jobless rate, for bringing to Nevada the second-fewest stimulus dollars of all 50 states, and, of course, for all the usual GOP-tagged crimes and misdemeanors—”bailouts,” “deficits,” and “Obamacare.” The ad was paid for by a group named American Crossroads, a deep-pocketed conservative 527 group backed by Karl Rove.

There’s just one problem with the Rove group’s Reid attack ad: It’s basically one huge distortion. On “Face to Face with Jon Ralston,” a TV show focusing on Nevada politics, host Ralston eviscerated the ad: “The factual stretches and gross distortions here are egregious,” he said. All in all, Ralston considering the ad so untrue that, when it came time to grade it, he gave it a “D.”

Factcheck.org, a non-partisan media watchdog publication, similarly dissected American Crossroads’ ad and highlighted on inaccuracy after another. For instance, the claim that Nevada ranks second-to-last in stimulus money received, Factcheck found, is based on a February 23 Las Vegas Review-Journal story published mere days after President Obama signed the stimulus bill. The Review-Journal‘s calculations about stimulus funds going to different states isn’t based on actual payments at all, but rather early projections about where the money might go. ProPublica says Nevada ranks 43rd out of 50 for money received, but judging Reid’s job at bringing home stimulus money is more complex than that:

[B]laming Reid for Nevada’s share of the stimulus funding is difficult to do. A lot of the money is driven by formulas, such as additional funds for food stamps and Medicaid. According to the Las Vegas Review-Journal article cited in the ad, Nevada “extends medical assistance to the smallest proportion of needy people of any state in the country.” Other stimulus spending was decided by competitive bidding, such as the Race to the Top education funds.

The ad also says Nevada’s unemployment rate is “well over 20 percent.” Well, that’s just not true at all. The statistics used in the ad come from unnamed experts in a May 21 Review-Journal who had given a rough estimate as to the state’s jobless rate including those who’re underemployed and no longer looking for work, known as “discouraged workers,” Factcheck found. It takes five seconds and two clicks of your mouse to see that the Silver State’s jobless rate is 14.2 percent. Now, that’s still the highest rate in the US, and it qualifies for a full-blown economic crisis. So why lie in a campaign ad and make it look worse than it is?

All in all, the ad is embarrassing for how severely it distorts reality. But then again, the ad was put out by a group headed by a political operative, Karl Rove, who skewed the truth to sell an entire country an entire country on going to war in Iraq. Should we be at all surprised?