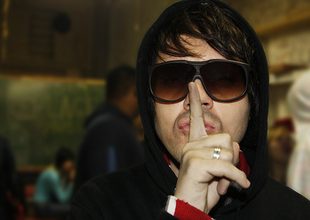 In her new book, “Every Rose Has Its Thorn: The Rock ‘n’ Roll Field Guide to Guys,” Nerve sex and dating advice columnist (aka Miss Information) Erin Bradley takes readers on a Journey (see what I did there?) of the rock stars and wannabes that we adore and abhor. Filled with quizzes, memes, true-life stories, and cheeky illustrations, her book demystifies 10 types of rocker guys, with advice on how to bed, wed, or behead them—depending on your inclinations. It’s as entertaining as it is endearing. If you’ve ever wanted to know what kind of guy owns a gorilla suit but not an interview suit (Mannish Boy), the type who “cuddles so close you can hear his cells dividing” (Boy with the Thorn in his Side) or the one whose voice can induce pregnancy through a stereo (Sexy Motherf*cker), then look no further.

Mother Jones: First off, I have a huge crush on you. But you didn’t write “The guide to seducing writers who live 3,000 miles away,” so I’ll lay low until you do. Why did you focus on musicians?

EB: I got over the “ZOMG I HEART BOYS IN BANDS!” thing in high school. But since then, I’ve always somehow managed to date musicians by default. Couple that with my five years as Miss Information and a deep, abiding love of rock ‘n’ roll, and a book like this felt really natural. I tried to wedge a few of my other lifelong loves—salt and birds of prey—into it but my editor told me no.

MJ: When you were little, did you dream that one day you’d write a book about how to bone dudes who act like Bret Michaels?

EB: No, I wanted to be a TV news anchor. Then a dentist. Then an archaeologist. Then a model. I did have Bret Michaels pin-ups on my walls starting at age 12. We had these things called “magazines” back then and I’d rip them out of Circus and Metal Edge and smuggle them out in my jean jacket at the corner drugstore. I was never the girl who was into New Kids on the Block or the Mickey Mouse Club. I liked my rockstars older—scuzzy and age-inappropriate.

MJ: As I was reading this, I kept thinking, Man, I wouldn’t date any of these guys! Then I thought, maybe it’s because I’m pretty gay. Still, would you want to end up with any of these archetypes?

EB: I would. All of them have redeeming qualities. Mannish Boy is great to take to boring gallery openings or wedding receptions. You’ll always have someone joining you in being wildly inappropriate. There may be some cultural references lost on a younger guy like Sweet Child O’ Mine but his lack of baggage more than makes up for it. Plus, the youth perspective is great if you work in a publishing or advertising job. You’re not fucking around, you’re researching. You can even put the condoms on your expense report.

MJ: Will owning this book get me laid?

EB: Probably. It’s not just girls who love quizzes. Guys love to be told about themselves, even if it’s wrong. There’s plenty of sex in it, too, so if you tell a guy he’s a Sweet Child and if he thinks he’s a Sexy Motherf*cker, it’s an easy to segue to invite him over to prove you wrong.

MJ: I know from reading your column that you’ve dabbled in bisexuality. Do you think there are enough female rockstar archetypes to make a book as hilarious as this one? Or is the domain of rock still pretty dude-centric?

EB: Are you kidding me? There are a ton. Stevie Nicks is the quintessential earth-mama flakester booty call. Björk’s the hyper-intellectual girl that did something really weird during the graduation ceremony in high school. Katy Perry is the beautiful, popular girl putting on a geek minstrel show. Debbie Harry is the seen-it-all heartbreaker still making young guys’ heads swivel ‘round. Rock ‘n’ roll is dude-centric in the sense that more males than females make it big and worm their way into the public’s consciousness, but there are millions of women out there every day, playing shows and rocking their ladygirl balls off.

MJ: One time I was fooling around with this guy and Nick Cave and the Bad Seeds’ “Murder Ballads” came on the stereo. This is actually not a question, but more of a cry for help. Do you have advice on how can I purge that traumatic experience from my memory?

EB: I used to work in an ice cream parlor that had a 50-disc CD changer. One of the songs in the mix was Tori Amos’ “Me and a Gun.” Talk about the wrong thing to have on while you’re doling out mint chocolate chip to a group of five-year-olds. I find the best way to cope with that kind of stuff is to look at it as material. Embarrassments kept to yourself are like story butterflies, waiting to come of their cocoons and be released into the world. Don’t keep that beauty bottled up.

MJ: Do you have any makeout music deal breakers? If so, name a few.

EB: I’m not into anything dance, trance, electro, electronica, club, or house. That said, I can power through most anything given enough alcohol and the right partner. Reggaeton is probably the only thing that will make my genitals stage a walkout. I’d rather listen to nursery rhymes or whale sounds.

MJ: Do you really think Johnny Depp looks like a catfish?

EB: You don’t? I love facial hair, as in “borderline disturbing” love facial hair, but it’s not for everyone. That wispy ‘stache and goatee are doing Dr. Depp no justice. Just accept that you’re a pretty boy and stay clean shaven. No one’s buying the weathered intellectual look. You make Disney movies, son.

MJ: I never thought I’d see James Taylor and Lil Wayne together in the same rocker archetype, but it totally makes sense when you factor in all the heroin. How did you do research for this book?

EB: I started by thinking of rockers I associate with these types. I also did some brainstorming with my sister [Heather Bradley, the book’s illustrator] and friends over email. There were some types that were harder to come up with rockers for than others. Like Father Figure, for instance. What makes a rockstar a Father Figure when most of the best-known rockers are fathers? But then I thought of someone like Ozzy, who has the traits so many people associate with our fathers: doddering, not wanting to let go of his cool, and actually being cool—the latter of which is something most of us don’t discover about our parents until much later on.

MJ: If this book had a soundtrack, what would it be?

EB: There are playlists in every chapter, so I suppose it would be some combination of those. My father recently told me he downloaded all the book’s songs to his iTunes. I’m still trying to decide whether this is bad or good. On one hand, he’s discovering new music. On the other hand, he’s wasted a good deal of money on throwaway songs like “Animal Crackers in My Soup” and Billy Squier’s “The Stroke.”

MJ: I noticed that you thanked your cats in the acknowledgments section. How did they react to this honor?

EB: Well, one’s on a six-month sabbatical in Slovenia, so she hasn’t really heard about it. She’s really into the post-Communist economic restructuring that’s happening over there and gathering research for a book of her own. The other one looked up at me briefly while sipping from his water bowl.

MJ: Which artist past or present would you most like to be a groupie of?

EB: I’m going to interpret “which” to mean plural and give you a couple: