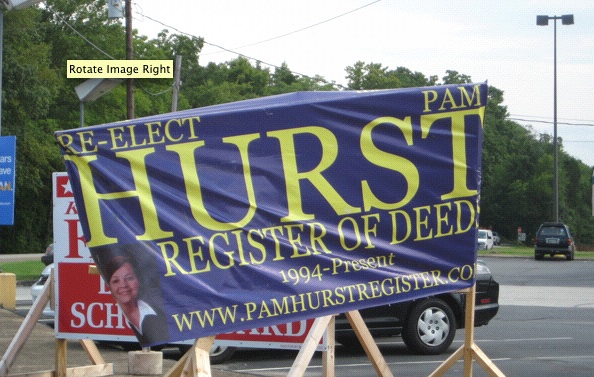 Primary Season: Congressional races get all the ink, but thousands of people will vote for people like Pam Hurst in the Tennessee primary—whether or not they know who she is (Photo: Tim Murphy).We left Murfreesboro, Tennessee a few days ago, but since it’s stuck with me, and since I’ve had some down time for the first time this trip, I thought I’d put up this stray bit of overheard wisdom. To set the scene: Murfreesboro is a small-sized city with an old-fashioned downtown square centered around the county courthouse. With the retirement of long-time congressman Bart Gordon, a Democrat, the upcoming Republican primary has taken on an added significance this year; the inside of the City Cafe is cluttered with literature for the various candidates lining up to replace him. In the corner by the window, five elderly women are studying up on the races not just for Congress, but down-ballot positions as well.

“Oh, he’s very niiiice,” says woman #1. Then she drops her voice: “He talked for quite a while.” They talk it over and agree not to let the latter become the enemy of the former. Moving on, now: “This here means they’re independent,” says friend #2. She’s referring to, I think, the box that says “independent.” “They don’t go either way, really,” explains woman #3.

And now they plunge into the unexplored places: county clerk, register of deeds, jailer. “I don’t even know who this is,” says woman #3, perplexed.