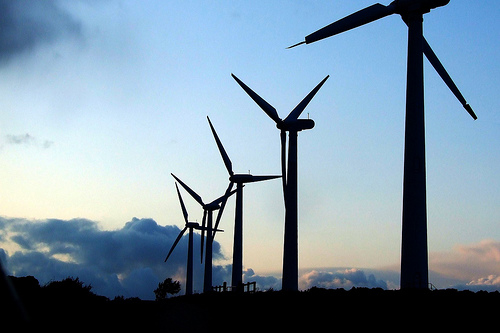 Climate legislation is now officially dead in the Senate, but does that mean that we can’t accomplish anything on clean energy this year? With Majority Leader Harry Reid set to bring what’s left of the energy package to the floor this week, environmental and labor groups, along with a number of clean technology companies, are making a last-ditch effort to get a renewable electricity standard attached to the bill.

Reid said Saturday that he doesn’t think he can pass even a bare-minimum renewable electricity standard, or RES, which would mandate that every state draw a specific portion of their power from renewable resources. “Right now, I don’t think I have 60 votes to get that done,” Reid told a crowd at the Netroots Nation conference Saturday.

But advocates of the RES say he’s mistaken. “I certainly know that finding 60 votes in the Senate on the verge of an important election is no easy task,” said Senate Majority Leader Tom Daschle. “But the votes are there for an RES.”

A Senate Democratic aide told me that leadership is concerned about including the RES now that the other climate provisions have been axed, because the RES “would replace the cap in terms of scare tactics from the right.”

But some Senate Democrats are pushing back on the idea that the votes aren’t there, including some moderate Midwestern Dems who were considered “no” votes on a carbon cap like Byron Dorgan (N.D.). Dorgan, Mark Udall (Colo.) and Tom Udall (N.M.) took the lead on a letter to Reid on the issue, which at least 17 other Democrats have reportedly signed as well so far.

The sad thing is, an RES really shouldn’t be a tough measure to pass. Twenty-nine states and the District of Columbia already have one in place. Most importantly, both the House and the Senate have passed an RES multiple times in the past decade, though it still has not made it into law.

The Senate actually passed a renewable energy standard calling for 10 percent of power to come from renewables by 2020 for the first time back in 2002, and passed it again in both the 108th and 109th Congresses. Then the House got its act together and, during the prolonged debate over the 2007 energy bill, the twice passed versions of the bill that included an RES. But then the Senate couldn’t muster enough votes and it didn’t make it into the conference bill, either, after the Bush White House pledged to veto the measure.

The House managed to pass an even more ambitious RES last June as part of the American Clean Energy and Security Act, one that requires 20 percent of electricity to come from renewables by 2020 (though it gave states an out if they couldn’t meet the target). But now the Senate can’t seem to muster support for even a minimal RES right now, like the 15 percent by 2021 RES that the Senate Energy and Natural Resources Committee passed last June with bipartisan support.

Solar and wind advocates say that even the House-passed standard is actually less ambitious than the path that the industry is already on, and have advocated for a 25 perecent standard by 2025. But at this point, they’ll take anything to put the US government on record in support of a renewables mandate. “Getting a signal in place that we’re open for business is going to be critical to build the base in the US and attract manufacturing,” said Denise Bode, CEO of the American Wind Energy Association (AWEA) in a call with reporters Monday. “In this political climate we have to do what we can do.”

AWEA, United Steelworkers, Sierra Club, Xcel Energy, and 11 other groups representing labor, environmental, and green business interests sent a letter to Reid asking him to include an RES in the package. “Without immediate passage, hundreds of thousands of future jobs in the clean energy sector could be lost and surrendered to other countries forever,” the groups wrote to the leader.

Governors are also joining the drumbeat for an RES, including Iowa’s Chet Culver (D), who extolled the value the state portfolio rule has had for Iowa, bringing the state to 20 percent renewables from just 5 percent four years ago. “Our energy future in this country depends on it,” said Culver.

For environmental groups, the RES has become the last best hope for anything resembling a clean energy requirement in a bill this year. “While we are deeply disappointed that the Senate is not moving a comprehensive clean energy and climate bill at this time, we think it would be a huge missed opportunity if this package did not include a strong renewable electricity standard, which creates jobs and has bipartisan support,” said Sara Chieffo, deputy legislative director at the League of Conservation Voters.

It’s still anybody’s guess whether the RES stands a chance of making it into the package this year. The RES could be the last hope for calling the Senate energy bill meaningful movement forward, or it could go down in flames along with the idea of mandatory carbon reductions this year.