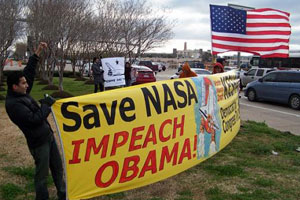 If elected to Congress, Kesha Rogers has an ambitious agenda. She has campaigned on colonizing Mars, impeaching President Obama, and freeing America from the clutches of the British Empire. But first, the improbable Democratic nominee in Texas’s 22nd district just wants to win recognition from her fellow party members. A devotee of Lyndon LaRouche—the fringe leader whose following is more often likened to a cult than a political movement—Rogers shocked Texas Democrats by winning the House primary race in March, carrying 53 percent of the vote in an anemic three-way contest in Tom DeLay’s old district.

Rogers poses little threat to incumbent Rep. Pete Olson in the securely Republican district, located in the southern Houston area. But her extreme views have prompted the state party to disavow her. Since her primary win, the Texas Democratic Party has refused to even list her on the party’s website. The party has defended its actions by saying that the LaRouche movement has had a long history of “illegal activities, discriminatory proclamations and thuggish behavior.”

But in late June, that didn’t stop Rogers from showing up with a posse of her supporters at the state party’s annual convention in Corpus Christi, where they handed out leaflets and periodically broke into song—Mozart’s “Ave Verum Corpus,” to be precise, to emphasize the LaRouche movement’s belief in a classical Western education. “People were very moved by this,” Rogers says. “They want leadership, they want beauty.” Rogers adds that some delegates even contributed money to her campaign on the spot, though she couldn’t specify exactly how much she raked in at the event.

Outside the convention center, however, the scene was less than harmonious. About a dozen of Rogers’ supporters were ordered to move off the grounds, prohibited from wearing their campaign T-shirts or distributing campaign literature on the premises since they were not official delegates. They ended up moving their operation to the sidewalk a few blocks down the road. Matt Glazer, an Austin Democratic strategist who attended the convention, declined to take a flyer from one LaRouche supporter—and says he was verbally assailed as a result. “He screamed out, ‘You guys are just as bad as the Republicans—as the Nazis,'” says Glazer, who claims the man continued by “calling me everything from a fag to an asshole, to telling me I had mental disabilities.”

Rogers, who is African American, says that she doesn’t condone such statements, insisting there’s a difference between the alleged insults and her own immovable belief that Obama’s health-care law is Hitleresque. “If we put a mustache on the president and said he should be impeached for supporting a policy that’s like Hitler’s, that’s different than saying anybody supporting the president is a Nazi,” says Rogers, who’s currently the only self-proclaimed “LaRouche Democrat” nominated for federal office.

During her primary campaign, the 31-year-old Rogers toted around the LaRouche movement’s now-ubiquitous sign of Obama with the Hitler ‘stache to promote her candidacy. Unlike South Carolina’s Alvin Greene—the unemployed candidate from nowhere to whom she’s sometimes been compared—Rogers has become a regular sight on the campaign trail. Raising a very modest $16,000 in campaign funds, mostly in individual donations, she has hired a truck to cruise through her district draped with a huge yellow banner bearing her campaign slogan: “Save NASA, Impeach Obama!” And Rogers and her small group of LaRouche activists have been actively canvassing and registering voters since the start of her campaign last winter.

Though Rogers considers herself a full-time activist with the LaRouche Youth Movement—which spreads the LaRouche gospel on college campuses—she’s repeatedly dived into Democratic politics as well. In 2003, she was elected to become a local Democratic precinct chair in Harris County, serving for two years before she made an ultimately unsuccessful bid for chair of the Texas Democratic Party in 2006. “She was a very good speaker—very articulate, very passionate,” says political consultant Harold Cook, former executive director of the Texas Democratic Party, recalling Rogers’ speech. “She didn’t mention in her speech a single wacky thing that she believes…If I didn’t know her, I might have voted for her, too.”

Her other two primary opponents, by contrast, barely registered on the trail. One was a local systems analyst backed by local Democratic and labor groups (who received $2,600 from the state party) but only got 28 percent of the vote. The third, a preacher who previously ran as Libertarian, pulled 20 percent. “[Rogers] had active grassroots young people that knocked on doors and pushed her name,” says Richard Morrison, the area’s Democratic county commissioner, who ran unsuccessfully against DeLay for the same seat in 2004. “She frankly just outworked her opponents.”

Local Democrats insist that voters in the district must not have been paying much attention when Rogers was out campaigning—otherwise they would have certainly been alarmed at her beliefs. Propagating LaRouche’s worldview that “the British Empire is the enemy,” Rogers regularly derides Obama as “a puppet of London” and warns that the greatest threat to the country is “the financial cartels of London and Wall Street”—which she believes are in turn controlled by the British monarchy. At the Texas Democratic convention, she handed out flyers that warned of the “New Dark Age” that “the City of London/Wall Street fascists” had imposed upon the US—and condemned the “pathetic hacks” in the Texas Democratic Party who were trying to suppress her. On Rogers’ campaign website, a video recapping the state party convention is titled “Down With the Traitors.”

Texas Dems also point out that there were two other African American candidates in contested local races on the primary ballot in March, suggesting that race might have played a role in Rogers’ primary victory as well—particularly as female black voters are a major part of the Democratic base in Texas. Rogers’ name also appeared first on the ballot, which could have given her an advantage. “If you didn’t research the things she said and didn’t find out her views, she looked like a hard-working, young African-American female that deserved your vote,” says Morrison. “But if you scratched beneath the surface—whoo…”

The Texas Democratic Party admits that it had invested very little in the race, believing it wasn’t worth their while to try and unseat Olson. “We could have done a better job of educating the voters on what the candidates’ positions were,” state party executive director Anthony Gutierrez told Time. (The Texas Democratic Party has refused further comment.) Though the stakes are low in the 22nd district, some Texas Dems worry that Rogers’ candidacy won’t help the credibility of a party that’s still trying to rebuild in the state. “It certainly soils our image,” says Morrison. “It does nothing for [us] to have somebody that extreme as our nominee.”

Rogers maintains that she’s tapped into a genuine well of frustration in the district—and that it’s simply the state party brass who’ve exiled her because “they’re scared of the truth.” “Everything that we did was very much visible, and the response we got was that a lot of people were demoralized by the leadership,” she says. And Rogers isn’t planning to let up with the rest of her campaign, with a townhall planned for the end of the July and weekly “policy meetings” at a coffee shop in Seabrook, a working-class town bordering Galveston Bay.

The Texas Democrats may have all but given up on the district, but the same can’t be said for Rogers’ small band of devotees, who’ve shown up at everything from city hall speeches to tea party rallies. Morrison recalls back in February when the activists surfaced at a Chamber of Commerce event in Needville, a tiny ranching and farming town south of Houston, set up a “Kesha for Congress” campaign booth, and proceeded to break out into song. “It was pretty disruptive,” recalls Morrison, who was at the meeting. “But none of her opponents showed up.”