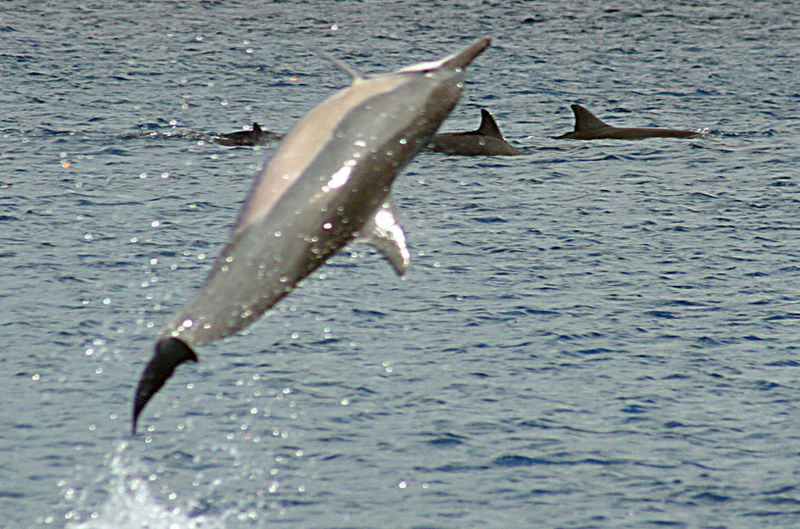 The epic 10-year long Census of Marine Life, now winding to a close, reveals we know less about the biodiversity of the midwater ocean than any other region—less than we know about shallow waters, coastal waters, the seafloor, even the deep seafloor. Yet the vast featureless realm of the deep open ocean is home to some of the richest aggregations of life on our planet.

In my new MoJo cover article, BP’s Deep Secrets, rushed into early release, I write about cutting-edge science casting light (well, casting sound, actually) on the vast strata of life known as the deep scattering layer (DSL) inhabiting the deep pelagic zone. Virtually all the marine we know and love from the surface ocean (whales, dolphins, sea turtles, sharks, billfish, predatory fish) dives down to feed on the DSL, which rises every night like a great dumbwaiter from the deep bearing every manner of seafood delicacy on a platter of darkness.

If you’ve ever wondered what dolphins do at night, then you’ll want to read about the amazing work of Kelly Benoit-Bird at Oregon State University and Margaret McManus at the University of Hawaii Manoa. I had the good fortune to spend time at sea with them recently as they deciphered the mysteries of the dark ocean off Hawaii. We happened to be offshore recording the vertical migrations of the deep scattering layer and the dolphins feeding on it at the moment the Deepwater Horizon well exploded. Suddenly my article looking at a better future for the oceans took an unexpected turn.

Sadly, BP’s abominable catastrophe is hammering the migratory realm of the DSL harder than any other ocean environment. In pumping massive quantities of chemical dispersants directly to the Deepwater Horizon wellhead 5,000 feet down, BP transformed oil that would have floated to the surface—where it might have been skimmed—into submerged plumes of dispersed droplets destined to migrate the superhighways of underwater currents long after the oil at the surface has weathered away.

Now a new paper in the open access PLoS ONE analyzes our understanding of the distribution of marine biodiversity in the global ocean—as a crucial first step towards more effective and sustainable ocean management in the future. From the paper:

Recent efforts to collate location records from marine surveys enable us to assemble a global picture of recorded marine biodiversity. They also effectively highlight gaps in our knowledge of particular marine regions. In particular, the deep pelagic ocean—the largest biome on Earth—is chronically under-represented in global databases of marine biodiversity. The deep pelagic ocean remains biodiversity’s big wet secret. Given both its value in the provision of a range of ecosystem services, and its vulnerability to threats including overfishing and climate change, there is a pressing need to increase our knowledge of Earth’s largest ecosystem.

Clearly the deep pelagic ocean is also severely threatened by our oil addiction and by the corporations recklessly drilling for it in the darkness beyond our sight.