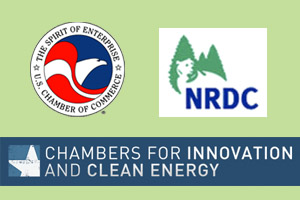 A new split over climate policy is brewing within the ranks of the US Chamber of Commerce as a breakaway group of local chambers is getting ready to publicly split with the business lobby’s hardline stance against climate legislation. The new climate coalition, known as the Chambers for Innovation and Clean Energy (CICE), will press Congress to take stronger action on climate and energy issues. It has already signed up about a dozen chambers and will officially launch later this year.

The US Chamber is already working behind the scenes to discredit the new group. After it caught wind of the effort last month, it fired off a letter to local chamber leaders, discouraging them from joining CICE, which it claimed was “established by the Natural Resources Defense Council.” The letter, written by US Chamber board member Winthrop Hallett, the president of Alabama’s Mobile Area Chamber of Commerce, states that the new group’s “indirect purpose appears to be undermining the U.S. Chamber’s and the business community’s leadership on” climate issues.

The claim that CICE is little more than a front group for the NRDC is “outrageous” and “really just pissed me off,” says Steve Falk, the president of the San Francisco Chamber of Commerce, which has been organizing the independent climate coalition. Hallett’s letter, which has not been posted publicly but which Mother Jones has seen, does not explain the alleged connection between CICE and the NRDC. Hallett and a spokesman for the US Chamber did not respond to requests for comment.

In a letter that Falk sent to local chamber leaders last week in response to the US Chamber’s attack, he speculated that its claim of a NRDC link might be based on CICE’s connection with Environmental Entrepreneurs (E2), a NRDC partner group that bills itself as “the independent business voice for the environment.” Falk and E2 cofounder Bob Epstein say that the group did help create CICE’s website but did not conceive of the idea for the group or craft its talking points.

In his letter to chamber leaders, Falk assured them that “no organizations other than local chambers of commerce have or will influence CICE’s principles.” The “core principles” published on CICE’s website call for America to “lead the clean energy race” and assert that “limiting carbon emissions will drive innovation.” Falk says the principles were crafted in partnership with other chambers and were based on language the San Francisco Chamber had originally developed in support of AB32, California’s cap-and-trade law, which is scheduled to go into effect later this year.

Falk says the San Francisco Chamber began organizing the alternative climate coalition two months ago after he realized that lobbying for a climate bill on his own “is probably not the best way to impact national legislation.” Thousands of businesses have signed up to support carbon regulations through coalitions such as American Businesses for Clean Energy, but he noticed that no similar effort existed among local chambers of commerce. He worried that the chambers’ failure to go to bat on the issue could mean that companies in San Francisco and other progressive cities “will wake up one day and question the relevance of chambers of commerce.” Dozens of local chambers from cities across the country are seriously considering joining CICE, accordig to Falk. Last month, he decided to postpone CICE’s original August launch date after plans to limit carbon emissions stalled in the Senate. But the group’s existence leaked out late last week after a reporter from the Aspen Daily News atteneded a board meeting of the Aspen, Colorado, chamber of commerce, a CICE member.

Though the national Chamber of Commerce has said that it could support some form of climate bill, it has opposed aggressive efforts to limit carbon emissions and argued that any such action should be the result of a global treaty, not federal regulation. Over the past year, it has faced widening divisions over its policy. Since last August, when Chamber vice president Bill Kovacs called for a “Scopes Monkey Trial” on climate science, more than a dozen major companies have dropped out of the Chamber or distanced themselves from its climate policy. Several local chambers have publicly opposed the national group’s climate stance; the San Francisco Chamber even lobbied against it in Washington.

The US Chamber has known about the new climate coalition since mid-July, when its West Coast representative obtained a copy of a  membership solicitation from the group. Falk then sent the US Chamber a copy of CICE’s principles and asked for feedback. The only official response he’s gotten to date is a copy of the letter from Winthrop Hallett, who chairs the US Chamber’s Committee of 100, a top policy committee.

Falk ultimately hopes to attract 30 to 50 local chambers to CICE—enough to earn the group a prominent spot in the national climate debate. The way he sees it, there’s no conflict between advocating for a progressive climate policy and remaining staunchly pro-business. “I mean, we’re a chamber of commerce,” he says. “We don’t want government to mandate how business is run. But we know that there’s a whole new economy out there, a whole new economic development engine with a move to clean energy. We see it happening in San Francisco. We think that’s possible elsewhere.”