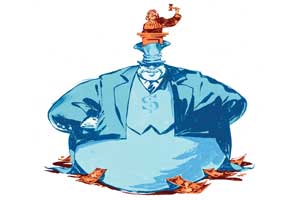 Perhaps the most famous—and contentious—judicial election of the last decade was held in West Virginia in 2004. Don Blankenship, the CEO of Massey Energy, spent $3 million of his own money on ads against Warren McGraw, an incumbent state Supreme Court justice. Some of the ads misleadingly suggested that McGraw had released a child rapist early; the campaign was so outrageous, it ended up inspiring a John Grisham novel, The Appeal. In the end, McGraw lost, and his replacement, Brent Benjamin, became the swing vote on a decision that overturned a $50 million verdict against Massey in a suit brought by another mining executive, Hugh Caperton. (Caperton’s suit alleged that Massey had tried to drive his firm out of business so it could buy its mines.)

Caperton appealed the decision on the grounds that Benjamin should have recused himself, and four years later, the US Supreme Court agreed, sending the case back to the West Virginia high court. But that was cold comfort to McGraw, who says his failure to win reelection is a sign of the times. “Political campaigns are won and lost nowadays on the basis of how much money is spent,” he says. “I’ve always survived without that. Now…we’ve turned the process over to the rich and powerful.”

Indeed. For a down-ballot category that even well-intentioned voters pay little attention to, judicial races are astonishingly expensive. In 2004, $9.3 million was spent in the race for a single seat (pdf) on the Illinois Supreme Court. That’s higher than the price tag of more than half the US Senate races in the nation that year. In 2006, three candidates for chief justice in Alabama raised $8.2 million combined.

But those sums could look paltry compared to the spending likely to be unleashed in the wake of the Supreme Court’s Citizens United ruling. In all, 39 states elect judges—and with the stakes including everything from major class actions to zoning and contract cases to consumer protection, workplace, and environmental issues, corporations have always taken a major interest in those races. The US Chamber of Commerce, Forbes reported in 2003, has devoted at least $100 million to electing judges sympathetic to its agenda. “No organization has had more success in the past 10 years of judicial elections,” says James Sample, a professor at Hofstra University who studies judicial reform issues. “Its winning percentage would be the envy of any sports franchise.” Citizens United has essentially wiped out not just federal restrictions on campaign spending, but many state-level regulations as well, Sample notes, and that’s “going to increase the ability of corporations, and to a much lesser extent unions, to engage in electioneering that is basically aimed at winning particular cases.” And given the low profile of these races, it may not take that much to sway that outcome, notes Bert Brandenburg, executive director of the advocacy group Justice at Stake. “A judicial election is a better investment for anyone spending money” than, say, a congressional campaign.

Even judges in safe seats are dreading that future. Wallace Jefferson, the chief justice of the Texas Supreme Court, could probably get reelected until the end of time—he’s a Republican, and no Democrat has won a statewide election in the Lone Star State in more than a decade. Still, Jefferson has to raise money to run every six years, and the people most likely to give are the ones with the most at stake in the outcome. Of the $1.1 million he raised for his last race in 2008, nearly half came from lawyers and lobbyists—a pattern that, he says, threatens the integrity of the justice system: “It’s a natural reaction to think that a judge that has received money from a litigant or a lawyer would be predisposed to rule in their favor.” And keep in mind that those direct campaign contributions are limited—to $5,000 per donor in Texas, for example—whereas post-Citizens United, corporations or advocates can spend whatever they choose.

If the 2004 West Virginia contest were held today, Massey wouldn’t have had to rely on the resources of its CEO to defeat McGraw. It could have thrown the full might of its corporate treasury behind the effort. And once that happens to a few judges, notes Paul Ryan, an election finance-law expert at the Campaign Legal Center, a company may not even have to actually flip an election to convince a judge to toe the line. Just hinting that it could open its pocketbook might be enough.