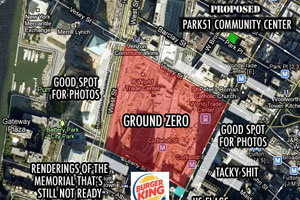 President Barack Obama has declared that a group of moderate Muslims have the right to build a community center in lower Manhattan, two blocks from the site once occupied by the World Trade Center towers. Yet representatives of a wholly US government-funded outfit have joined the vociferous opposition to the Park51 or Cordoba House project that critics have dubbed the “Ground Zero Mosque.” A leader of this group—which receives $4.3 million a year from the government—has even proclaimed that the community center could be a front for Islamic terrorism. That’s not all: the same agency, the US Commission on International Religious Freedom (USCRIF), has been the subject of an Equal Employment Opportunity Commission complaint for allegedly discriminating against Muslim employees.

The commission was created by Congress in 1998 to monitor religious freedom around the world and scold countries that aren’t meeting religious freedom obligations outlined by international human rights treaties. Its sole source of funding is the US government; it is empowered to make recommendations to the president about policy decisions related to issues of religious freedom. Recently, the commission has decried Vietnam for its systemic violation of religious freedom and slammed China for its repression of Uighur Muslims. But leading conservative members of the commission have supported the opposition to the Cordoba House, essentially joining those who want to deny New York Muslims the freedom to build their religious and cultural center at this particular site.

In a recent piece for National Review Online, Nina Shea, one of USCIRF’s nine commissioners (who are selected by the president and congressional leaders), wrote that instead of “a cultural center for all New Yorkers,” the “mosque” project could be “a potential tool for Islamists”—suggesting it would be a hotbed of jihadism that, among other things, spreads the literature and ideas of Islamic extremism. She compared the leaders of the Cordoba House project to convicted terrorist Omar Abdel Rahman (the “blind Sheikh”) and accused Fort Hood and Christmas Day bombing coordinator Anwar al-Awlaki. (Shea’s piece, as of Monday, was no longer showing up on the NRO site.)

Shea, long an influential figure in neoconservative circles last appointed to the commission by House Minority Leader John Boehner (R-Ohio), is not the only commissioner of this religious freedom organization trying to block the Cordoba House project. Leonard Leo, the chairman of the commission and a top official in the conservative Federalist Society, is director of Liberty Central, a new tea party-related rightwing group organized by Virginia Thomas, the wife of Supreme Court Justice Clarence Thomas, and Liberty Central has organized a petition campaign against the Cordoba House project. Moreover, Virginia Thomas is one of several conservative leaders participating in a 9/11 rally against the Cordoba House project, organized in part by anti-Islam activist/blogger Pam Geller, who runs an organization called Stop Islamization of America and who kick-started the “mosque” controversy. (Geller recently said that Obama has “sided with Islamic jihadists.”) To break this down: the chairman of the US Commission for International Religious Freedom (Leonard Leo) is working closely with a conservative activist (Virginia Thomas) who is a featured speaker at an event being mounted by an outright anti-Islam group. [Regarding Thomas’ participation in this rally, see the update below.]

And as TPM reported, Richard Land, another USCIRF commissioner and the influential president of the conservative Southern Baptist Convention’s Ethics and Religious Liberty Commission, has opposed the project, comparing it to a (non-existent) Shinto shrine near Pearl Harbor and a (never-built) convent near Auschwitz. (Land says that the USCIRF itself is prohibited from intervening in domestic matters, but the commission has officially criticized a Saudi-run high school in Alexandria, Virginia.)

The USCIRF also happens to have connections to former UN ambassador John Bolton, one of the fiercest critics of the Cordoba House project. Bolton served as a USCIRF commissioner in the early years of the George W. Bush administration, and Jackie Wolcott, the commission’s current executive director, worked under Bolton when Bolton was in charge of nuclear nonproliferation efforts within the Bush State Department. (Bolton wrote the forward to Geller’s anti-Islam book and is another scheduled speaker at her September 11 rally against the project.)

The USCIRF may have internal problems with Muslims, too. In February, the Washington Post broke the news of religious infighting at USCIRF. According to the Post, Safiya Ghori-Ahmad, a former policy analyst at the commission, filed a complaint with the Equal Employment Opportunity Commission, alleging that her contract was cancelled because she was a Muslim and affiliated with the Muslim Public Affairs Counsel, an advocacy group. Another researcher at the commission, Bridget Kustin, quit in protest after Ghori-Ahmad’s contract was not renewed. In her resignation letter, Kustin wrote that she did not want to “remain part of an organization that would be willing to engage in such discrimination.”

In a message on the commission’s website, Leonard Leo notes that the USCIRF “seeks to advance the visibility of and serious thinking about” how to best address the challenge of religious “intolerance” throughout the world. Yet Leo and the conservatives of the taxpayer-financed commission are siding with the foes of the Cordoba House and bolstering the misleading claims about the “mosque.” They have not been advocating tolerance at home.

UPDATE I, 12:00 p.m. Monday: We spoke to Imam Talal Y. Eid, a Muslim USCIRF commissioner. He says the anti-Cordoba House commissioners were speaking in their personal capacities, he disagrees with them (although he respects their opinions), and he may raise the issue with them when he sees them. (He was out of the country last week.)

UPDATE II, 8:00 p.m., Monday: A publicist for Liberty Central emailed us a statement from Sarah Field, the conservative group’s chief operating officer: “Mrs. Thomas was not invited, and has not agreed to attend and speak at the 9/11 Rally at Ground Zero on September 11th, 2010 in lower Manhattan, New York City. Any report of her attending is an error. However, Liberty Central does support leveraging citizens’ voices in opposition to this mosque.” Geller’s Stop Islamization of America did issue a press release on August 14 that noted, “The confirmed list of speakers includes 9/11 family members; former U. S. Ambassador to the United Nations John Bolton; former Speaker of the House Newt Gingrich; the Dutch Parliamentarian and freedom fighter Geert Wilders; Gary Berntsen, a candidate for the US Senate from New York; Jordan Sekulow of the American Center for Law and Justice, which has filed suit to stop the Ground Zero mega-mosque; Ginny Thomas, Supreme Court Justice Clarence Thomas‘s wife; Michael Grimm, a candidate for Congress from New York‘s 13th district and a 9/11 first responder; and journalist Andrew Breitbart.” We have asked Geller to explain how Thomas came to be promoted as a confirmed speaker, if (as Field says) she was not even invited to participate.