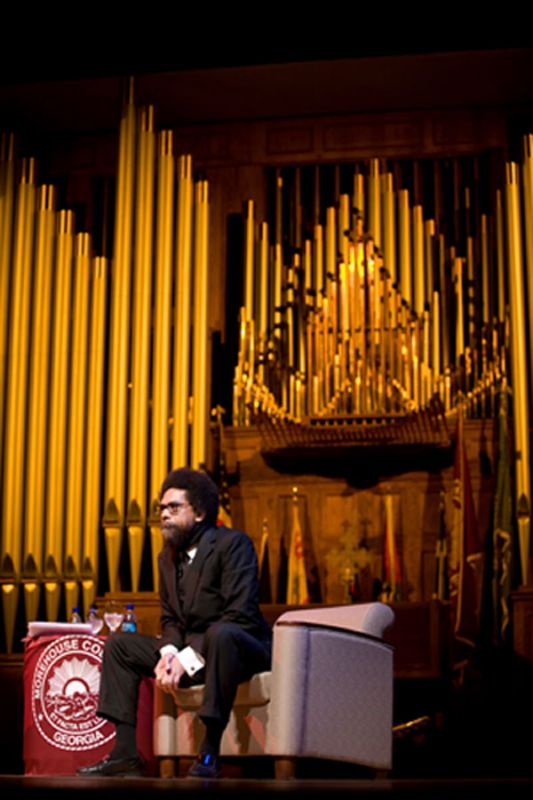 Cornel West is a busy guy: Prince, Talib Kweli, and Jill Scott are just a few of the musical revolutionaries with whom the Princeton professor of religion and African American studies has collaborated. You may recognize 57-year-old West’s bearded, sage-like face from Tavis Smiley’s recently discontinued State of the Black Union conferences or his annual appearances on The Colbert Report. He was also in both Matrix sequels, playing the Zion Elder, Councillor West. On his albums, of which there are three, West holds forth against a backdrop of great beats and soulful grooves, with lyrics that speak to his vision of creating a nation that works for everyday people. Currently he’s preparing for next month’s paperback release of his 2009 memoir Brother West: Living and Loving Out Loud. In our interview, West spoke about politics, his various forms activism, and why he believes music has the potential to close the widening divide between intellectuals and the public at large.

Mother Jones: Could you talk about why having a black president doesn’t necessarily mean that change isn’t needed anymore or that we’ve entered a post-racial era?

Cornel West: On the one hand, [Obama’s election is] a sign of tremendous progress in terms of struggling against racism. It means we are less racist. It doesn’t mean we’re post-racial. And less racist is fine, but we’ve still got various forms of institutional racism operating, covert forms of racism operating, and of course we’ve got a white backlash against brother Barack himself, which is why we’ve got to protect, respect, and correct it. In that sense the idea of congratulating ourselves perennially because we have elected a black man is inappropriate. We celebrated in January when he was inaugurated then we went to work. And in going to work, what did we find? Structural racism, unacceptable levels of social misery, unemployment, infant mortality, poor access to health care, low-quality education, just right across the board. And all of that work that needs to be done is not helped by saying that we’re in a post-racial era. There’s no such thing as post-racial in that sense. On the ground people are still suffering. We’ve still got a lot of things to do.

MJ: I received a comment from one of our readers who said that there are many people who have lifted themselves out of horrible situations without waiting for the government to help them. I’m sure you’ve encountered this criticism in your work. How would you respond?

MJ: What motivates you to use music as a form of activism, and what other kinds of activism do you do?

CW: I think that anytime you love people you hate the fact that they are being treated unjustly. And therefore you have to express the fire for justice that you have inside you by speaking out, by working with, by marching with, by being in solidarity with people who are suffering. It takes different forms. It can take the form of music, but The Wachowski Brothers are right on the same progressive page, trying to get people to think fearlessly on The Matrix. Same is true in the speeches that I give. Same is true in the various sermons I give in churches, in mosques and trade union centers, and prisons. As a Christian I work closely with prophetic churches, but I also do ecumenical work. I work with my Jewish brothers and sisters. I’m spending a lot of time now with my Muslim brothers and sisters, all of whom are concerned with justice. What I try to be is a multi-contextual progressive.

MJ: Do you think music is an effective way of bridging the gap between intellectuals and the public at large? Because the music you’re coming out with seems really contrary to the predominant big-pimpin’ hip-hop that’s taken over the airwaves.

CW: It’s true. But for me it’s primarily more transgenerational, trying to speak to the younger generation because most of the folk from my generation are old-school. They’re not really listening to the hip-hop artists.

MJ: I was just listening to the mix you put out with Prince, and it reminded me a little bit of Gil Scott-Heron.

CW: Well Gil Scott is something. He’s a giant. But Gil Scott’s a real artist. I’m just a brother out there trying to have some fun and maybe educate too. Cause I have a lot of fun, you know.

MJ: Besides music and reading, what else do you like to do for fun?

Listen to West’s collaboration with Talib Kweli (from the album Never Forget: A Journey of Revelations):