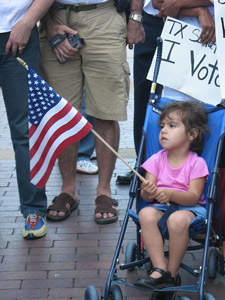 Yesterday, Senate Minority Leader Mitch McConnell (R-KY) jumped on the GOP’s anti-immigrant bandwagon and called for a hearing to repeal a portion of the 14th Amendment, The Hill reports. The part of the 1868 amendment McConnell and a slew of other conservatives—Senate Minority Whip John Kyl (R-Ariz.), Sen. Lindsey Graham (R-SC), state Sen. Russell Pearce (R-Ariz.), Rep. Duncan Hunter (R-Calif.), and the 93 House co-sponsors of a bill to end birthright citizenship—want to examine grants US citizenship to any children born in the US, even if their parents are undocumented immigrants. Jezebel reports on the sexist, xenophobic rhetoric spouted by Graham and his ilk to defend changing this immigration policy. But in the midst of this latest incarnation of anti-immigrant sentiment, let’s take a look at a small rundown via SEIU of some prominent US citizens who happen to be the children of undocumented immigrants and who incidentally wouldn’t be citizens if McConnell, Kyl, and other politicians have their way.

NASA Astronaut Jose Hernandez “was born in California to parents who entered the U.S. illegally in 1957, working as field hands and eventually acquiring permanent residence,” according to the Center on Immigration Studies. A flight engineer on the Space Shuttle Discovery, Hernandez’s work in the early ’90s led to the development of the first digital mammography imaging system, a tool used to detect breast cancer.

In 2007, Pete Domenici, the former Republican Senator of New Mexico, took to the Senate floor to recall the day in 1943 when his mother was arrested by US agents for being an undocumented immigrant. “By evening, my poor mother was released because she had a good lawyer. A lot of people don’t have that, and we know what happens to them under our laws.”  From the New York Times:

Mr. Domenici said he decided to tell his story when the hostile rhetoric about illegal immigrants started to boil. He said he wanted to remind his fellow Republicans that the sons and daughters of this century’s illegal immigrants could end up in the Senate one day, too. “I wasn’t trying to impress anybody,” he said of his story. “I think it just puts a little heart and a little soul into this.”

Domenici went on to serve as senator for 36 years.

Louisiana’s offshore drilling darling and current governor, Piyush “Bobby” Jindal adopted the name of the youngest Brady Bunch character at age four, reports the Times. His parents came to the US from India using a student visa six months before he was born.

There are other famous birthright citizens like Former US Attorney General Alberto Gonzales and Olympic Gold Medalist Henry Cejudo. To be sure, not every undocumented immigrant’s child fares as well as the people listed above. Undocumented workers do, however, contribute more income, sales, and property taxes than they cost in social services, the Congressional Budget Office found in 2007. And despite an increase in population in Arizona where the number of undocumented workers are high, the crime rate has remained flat, according to FBI Uniform Crime Reports. The facts likely won’t stop senators from pushing misinformation, but at least they can help combat it.