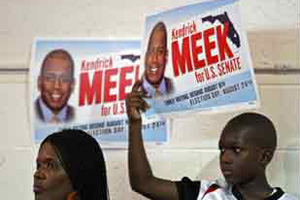 Florida voters are notoriously unpredictable, a jumble of ethnicities and races, silver-haired Northern retirees and Southern-bred natives, known for their independent streaks more than allegiance to any political party. This is the state, after all, of recounts and hanging chads—a place where famed political scientist V.O. Key Jr. described the political culture as “almost literally every candidate for himself.”

The two races have received more than their fair share of media coverage not just for the tea party angle, but for their larger political ramifications. The pressure will be on Florida’s Democratic Senate nominee to gain a seat in an election year where the party is girding for losses in both chambers of Congress. The gubernatorial race, meanwhile, has garnered national attention as the GOP aims to take back more governors’ seats in one election than ever before in history. The University of Minnesota’s Smart Politics blog reported that Republicans could reclaim as many 28 of 37 governorships up for grabs this fall.

I spent the past few days in Ft. Lauderdale, speaking with Floridians about these two blockbuster, multimillion-dollar battles. Despite all the ink spilled over the Greene-Meek and McCollum-Scott match-ups, most of the people I met hadn’t followed the election—quite a few couldn’t even name a candidate. But the ones who did show some interest basically affirmed Key’s maxim, with views ranging from party-line Democratic to “red-hot” conservative tea partier to proud independent.

Raymond Thrift, who lives in nearby Plantation, sat in the shade outside the Broward County government center downtown, polishing off a Kool cigarette. He told me he planned to “vote pretty much all Republican” in the local races, but he also expressed support for lame-duck Gov. Charlie Crist, who ditched the GOP in April to run for Senate as an independent. For governor, Thrift said he liked Alex Sink, the state’s chief financial officer—and a Democrat. Asked why a self-described Republican would vote with the Democrats, Thrift just shrugged.

Near the city’s Riverwalk entertainment district, I caught up with Elliot Baskin, who lives due north in Boynton Beach. Sporting Prada eyeglasses and a silver beard, Baskin insisted that he “wouldn’t vote for any of ’em”—today’s primary contenders, that is. “Let me tell you one thing: These guys are only interested in lining their pockets,” he said.

The dozen or so views I heard, hardly a scientific sample, did offer a whiff of the unpredictability of Florida politics. That’s according to Dario Moreno, a political scientist at Florida International University who has done some polling for Crist’s GOP rival, conservative Senate hopeful Marco Rubio.

Party unity is hard to come by here, says Moreno, given the array of ethnic groups scattered throughout the state, and its mix of urban and rural regions; African Americans in Miami, for instance, vote differently from African Americans in Gainesville and in the northern Panhandle, just as whites in Naples, on the southwestern coast, vote differently from whites in Tallahassee. “What you have is all these subgroups,” Moreno said, “and people have their own little power pieces.” Asked to predict today’s outcome, he hesitantly picked McCollum over Scott for governor, but had no prediction in the Greene-Meek smackdown.

If there was one recurring theme—in my interviews and in statewide polling—it was disgust with the overwhelmingly negative campaign tactics. In the Senate primary, Meek has let no controversy regarding his rival—a visit to Cuba, a bet against the subprime housing market, a friendship with Mike Tyson—pass without blasting out a critical email to his supporters. Greene has returned the favor, pointing to Meek’s stint with security contractor Wackenhut, a company that was accused of overbilling Miami-Dade County and later settled for $7.5 million. (Meek, who rarely mentioned the Wackenhut job, received the maximum campaign donation from his former employer.)

McCollum-Scott has been nastier still. The two Republicans frequently accused each other of lying and distorting one another’s record. Whereas a candidate’s website usually touts his accomplishments or legislative agenda front and center, McCollum’s ominously reads “Rick Scott: Release the Deposition.” This refers to confidential records from a lawsuit alleging that Solantic, a company Scott founded, engaged in criminal activity including misuse of a medical license and employer discrimination. Scott, meanwhile, took to the 7,000-member El Rey Jesus megachurch over the weekend to accuse McCollum of dishonesty and distorting the facts of his background concerning his call for an anti-immigrant law similar to the one that has divided Arizona.

According to a new poll, Florida Republicans’ esteem for McCollum remains dismal—his favorability rating with likely GOP voters was 38 percent, though that’s a modest improvement from 26 percent earlier this summer. Meanwhile, only half of likely Democratic voters thought well of Meek, and just 28 percent liked Greene.

This low regard for the candidates was palpable in nearly all of my street conversations. “It’s sickening to see the ads they’re running,” Elliot Baskin told me. “They’re fighting about things that may have happened years ago. Who cares?” Another Floridian, Michelle Manley of Miramar, told me she hadn’t decided whom to vote for, but described the tactics of all the campaigns as “very discouraging—I don’t think they want to tell us the truth,” she added.

Despite all the uncertainty, the latest polling does reveal a few betting lines. In the Democratic race, since the party faithful almost always make it to the polls, a low turnout helps the establishment candidate. Meek, who has support from the national party—Bill Clinton and Barack Obama campaigned for him—seems the likely beneficiary. Outsider Jeff Greene, who is largely self-funded, will need a higher-than-usual independent turnout to prevail.

In the GOP race, low turnout favors candidates who play to the loyal conservative base. That’s good for Scott, who polls 11 points ahead of McCollum among conservatives, according to Public Policy Polling. The more diverse the GOP crowd, the better McCollum’s chances.

Whoever wins today’s races faces a formidable challenge in November. Should Meek emerge victorious, he’ll face both Crist—whom Democrats approve of by a greater margin—and conservative star Rubio, a tea party favorite and former speaker of the Florida House. A recent Quinnipiac poll for the general election puts Crist on top with 39 percent, Rubio second with 32 percent, and Meek a distant third with 16 percent. In other hypothetical gubernatorial matchups, McCollum and Scott both trailed Democrat Alex Sink by a few percentage points.

Of course, predicting the outcome of a statewide Florida election months ahead of time is like picking the World Series champ on Opening Day. “At this time last year, the view was that Rubio had no chance at the Republican nomination…and Meek was a shoo-in for the Democratic nomination,” says FIU’s Moreno. “I think this shows how dynamic the situation is—and really how unreliable it is. Anyone who tells you they know what’s going to happen in November is just lying.”