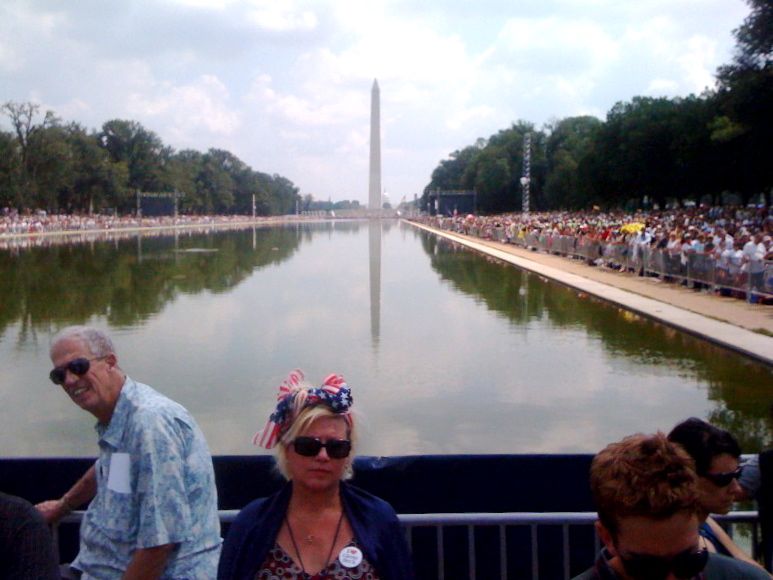 As we passed the Washington Monument this morning and waded into the growing crowd of thousands at today’s “Restoring Honor” rally, my friend, Chris, surveyed the turnout and then leaned in toward me. “Other than that guy back back there selling flags,” he said somewhat discreetly, “I’ve got to be the only black person out here today.”

He had a point. There were people of all shapes and sizes, young and old (though mostly old), from near and far at the rally on the Washington Mall—and, truth be told, they were almost all white. Despite the impressive turnout surrounding the Lincoln Memorial and the reflecting pool, I needed only two hands and maybe a few toes to tally the number of non-white attendees. You couldn’t miss the irony: On the same day and at the same location as Martin Luther King Jr.’s famous “I Have a Dream” speech—when conservative icon Glenn Beck would repeatedly invoke King’s memory and message on a stage featuring a portrait of Langston Hughes and a relative of King Jr.’s as a speaker—there were few, if any, black people in sight. “I’ve seen more people who’re black onstage than at this whole thing,” Chris said at one point.

We pushed onward into the crowd, trying to get closer to the front, where Beck was. But before we could get there, a middle-aged woman suddenly reached out and grabbed Chris’ arm. She pulled him close. The woman, as sweaty as the rest of us, asked Chris if he planned on attending the NAACP’s rally later in the afternoon. Without waiting for Chris’ response, she told us, “I kinda want to go, but I feel like I wouldn’t be welcome.” Hard emphasis on the wouldn’t be welcome. A bit surprised, Chris looked at me and then replied, “You mean kind of like I feel right now?”

A bit later on, after the rally had ended, Chris told me he didn’t mean to respond to the woman quite like he did. He didn’t feel any animus from the crowd, he said. Nonetheless, we agreed that for an event whose central figure, Beck, preached the importance of faith, hope, and charity, and drew heavily on King Jr.’s legacy, the paucity of non-whites in the crowd was startling. Not that it’s any big surprise, though. The tea party, whose followers made up a good percentage of today’s attendees, tend to be white, wealthier, male, and married, polls have shown. A racially diverse turnout at a Glenn Beck rally? In your dreams.